In the course of indexing the Brisbane Diocesan Newsletter, a photograph of a former Archbishop of Brisbane standing next to one of the most prominent First Nation poets of the 20th century sparked an investigation into the connections between Oodgeroo Noonuccal and St Mark’s Church, Dunwich on North Stradbroke Island. 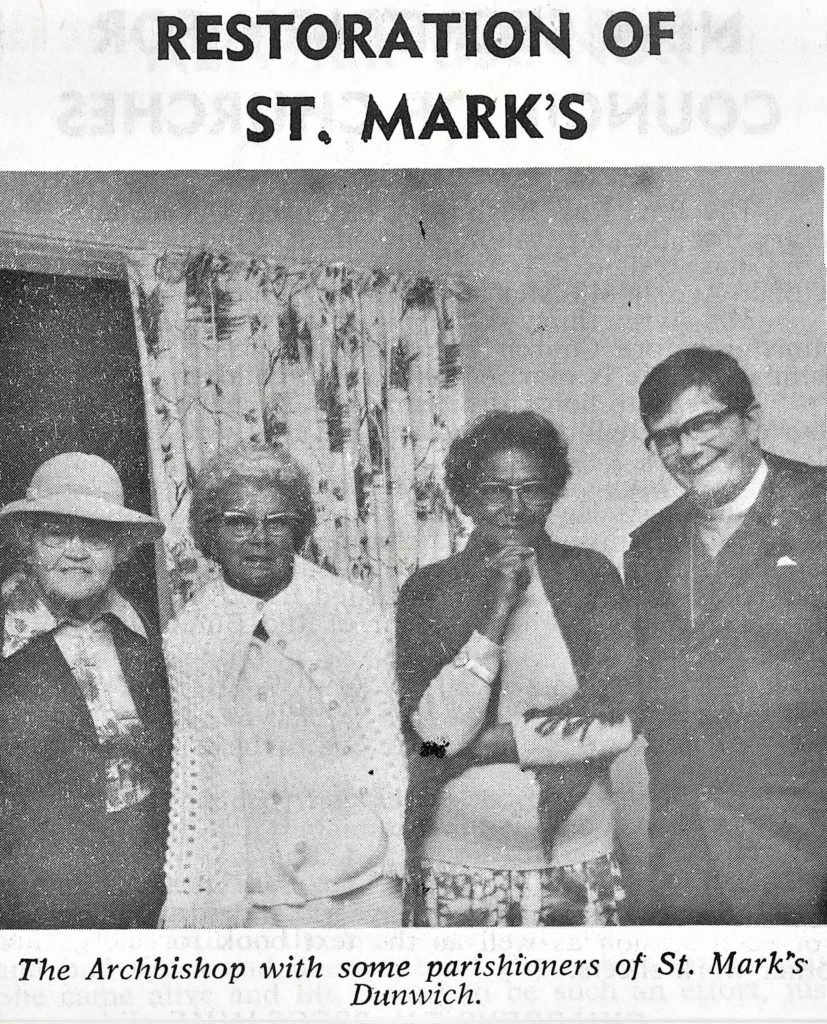 This wasn’t the first time I had engaged in research concerning Oodgeroo Noonuccal. In 2015, when the Records and Archives Centre was still at Bowen Hills, we were contacted by a priest, The Rev’d Alan Shepherd, who had visited St Mark’s, Dunwich. He said that in the vestry he had found a framed poem, called ‘Minjerribah’*, that was hand-written and signed by Kath Walker. He was  curious as to whether this was an original. After some considerable digging, I managed to find another hand-written copy of the same poem in the Fryer Library at the University of Queensland, where many of her papers are archived. The librarian I was in contact with noted that in a folder were many copies of the same poem, some typed and some hand-written. So the poem in the Dunwich vestry could be an ‘original’, that is written by Oodgeroo Noonuccal herself, but not a unique one. The poem was donated to the Church in 1997 by a Mr Spencer MacDonald of Point Lookout.

Minjerribah was a giant in the sun
His green back coated with cyprus and gum.
Belly brimming with waters so cool,
He stretched for miles in the sun.
And Pacific on the east
Quandamooka on the west
Bathed this giant in the sun.

But Minjerribah’s back is now broken:
Men came and tore out his guts;
Stole his rich grains of sand,
Stripped his cloak of cyprus and gum
Drained water from his ageless eyes
And weakened this giant in the sun.

Oh man! With your machinery and science,
Your greed and callous disregard.
When your savage looting and lying is done,
Will the Gods in the future
If future there is
Spare you your place in the sun?

I also knew that in the sanctuary of St Mark’s, Dunwich is a painting of Christ, painted by Oodgeroo Noonuccal and dated 1955. At this stage in her life she was still known as ‘Kath Walker’. This information, coupled with her being called a ‘parishioner’ in the photograph in the Brisbane Diocesan Newsletter, led me to believe that she must have had a long association of worshipping at the church. The reality was a little more complicated. 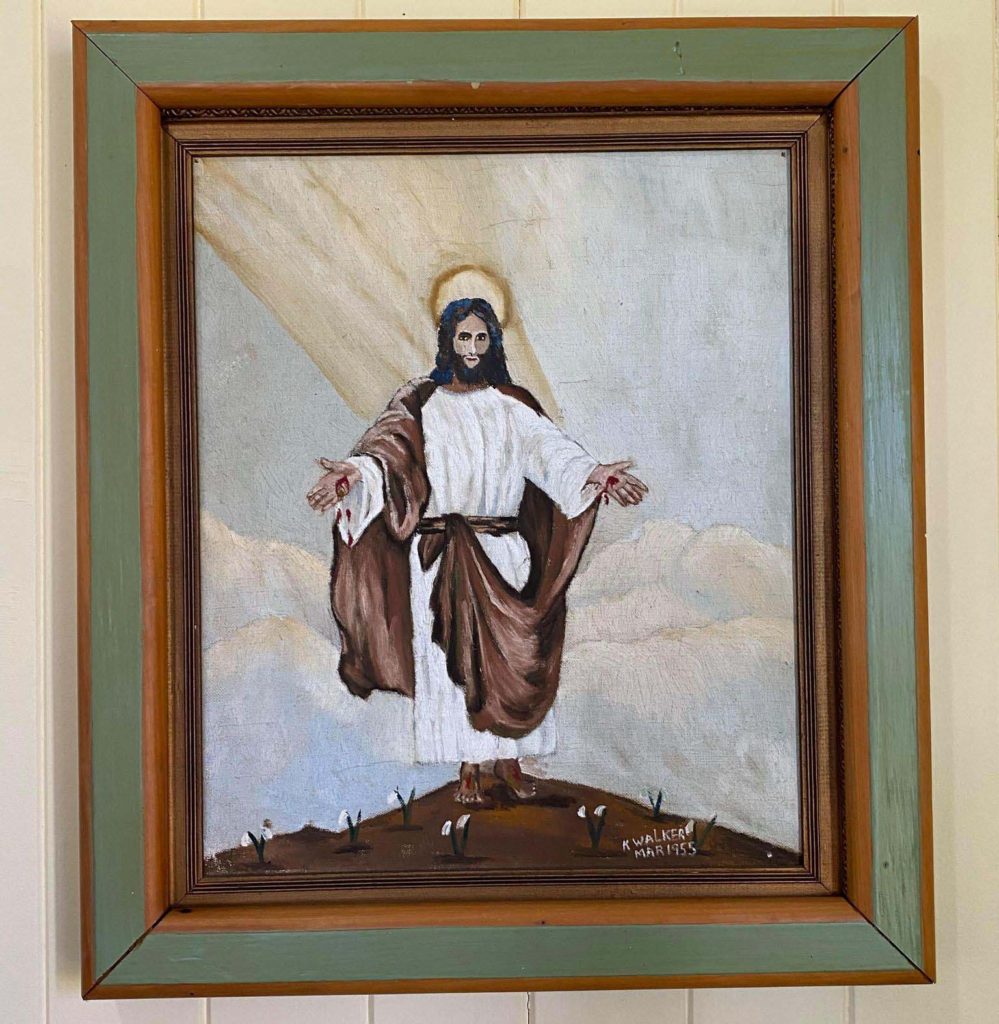 To say that Oodgeroo Noonuccal’s life was extraordinary is an understatement. She was born Kathleen Jean Mary Ruska in November 1920. Her childhood home was One Mile on North Stradbroke Island, or Minjerribah. The traditional custodians of Minjeeribah are the Noonuccal people, of which Kath and her family were proudly a part, through her father. Her father made sure she learned the reading, writing, and arithmetic that would allow her to gain employment and satisfy her creative cravings, while passing on the traditional ways of his people to his seven children, teaching them to hunt and about the local spiritual stories of the Noonuccal. She left school at 13 and moved to Brisbane to enter into domestic service, which was common of First Nations women at the time. This was short lived, however, as the Second World War reared its ugly head and, along with two of her brothers, Kath decided to serve, joining the Australian Women’s Army Service. 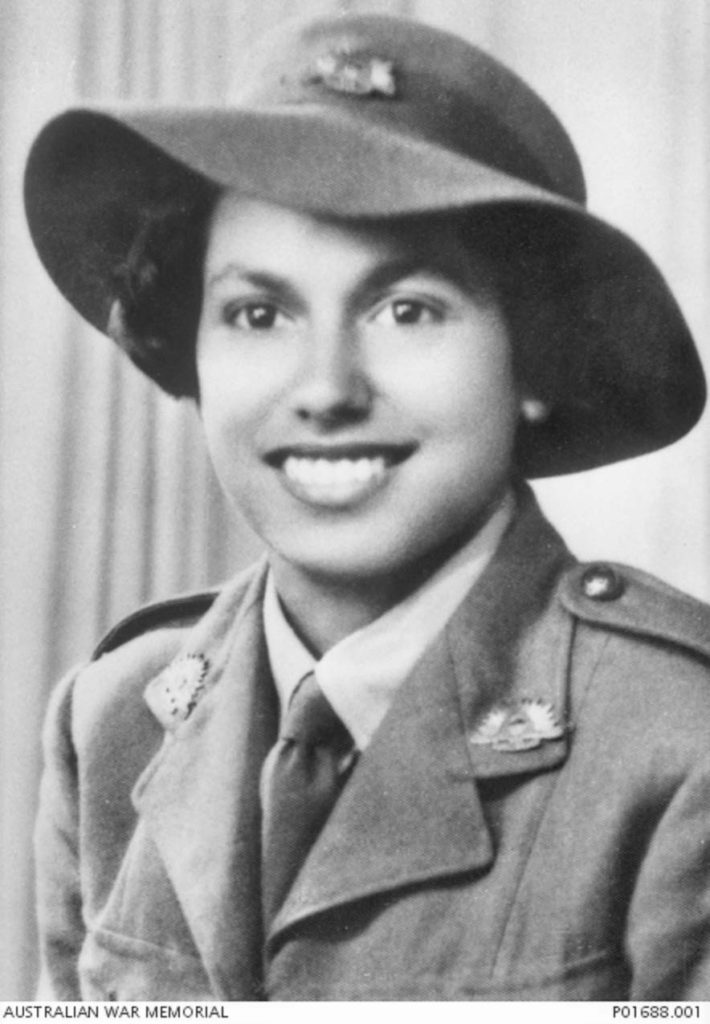 After the war, she joined the Communist Party of Australia (CPA). Her decision to do so stemmed largely, according to many sources including an obituary by John Collins, because it was the only political party to not have a white-Australia policy. As she became more active, however, the CPA’s desire to either edit or write her speeches for her led to a falling out, and her leaving the organisation. In the 1950s she joined the Realist Writers Group in Brisbane, forming a friendship with Judith Wright, who would champion Kath Walker’s poetry and literary output. It was from here that Kath Walker began to make a name for herself as a writer and an activist. In 1964 a volume of her poems was published for the first time, initially in Brisbane, and then in New York, making her the first Australian First Nations person to publish a book of poetry. 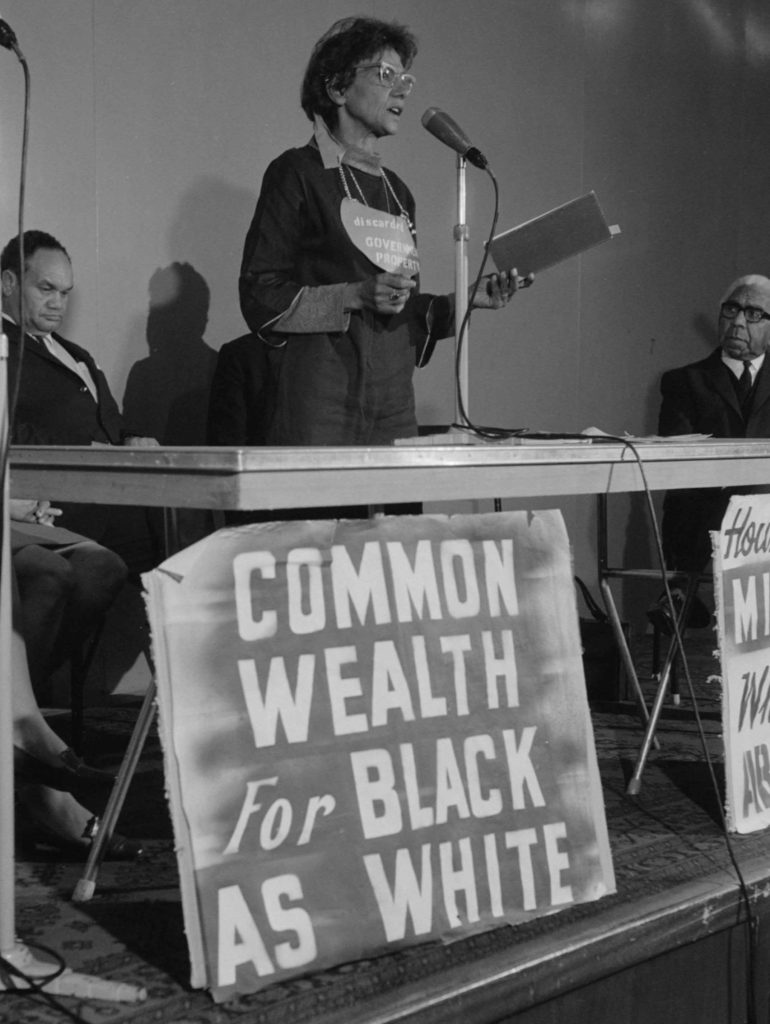 Kath served on the Federal Council for Aborigines and Torres Strait Islander Advancement and the Executive of the Queensland Aboriginal Advancement League. She was one of the prime movers in getting the 1967 Referendum held. At the end of that tumultuous decade she moved, once again, to Minjeeribah, creating a ‘sitting down place’ or Moongalba there. She lived there for the rest of her life.

In May, 1969 Kath was a delegate to a consultation of racism that the World Council of Churches had set up in London. From here she travelled widely, and over the next decade visited Asia, Africa the United States, and many Pacific Islands. She was even on an aeroplane that was hijacked in 1976. All the while, Kath Walker’s writing kept pace with her activism, and she received three honorary Doctorates, and produced poems, paintings and essays that are treasured to this day by many in Australian literary and artistic fields. 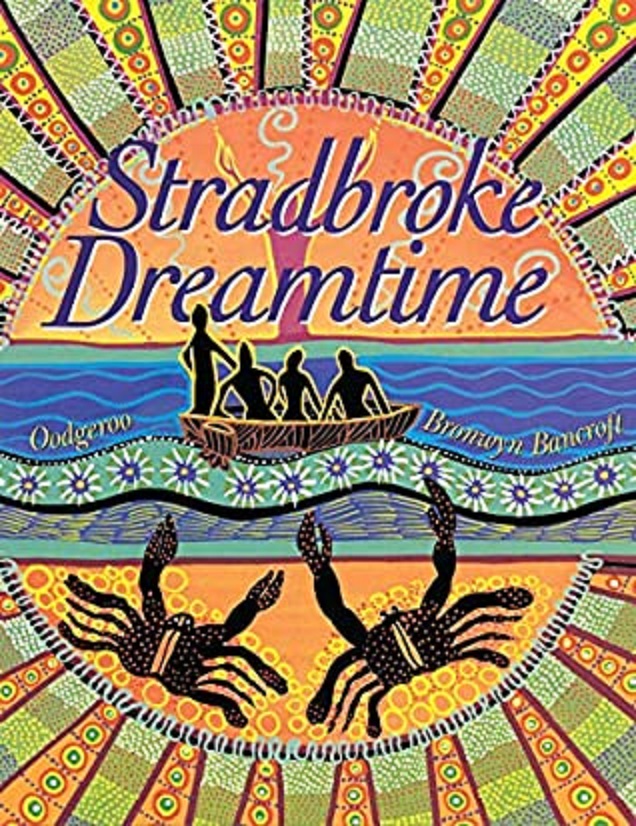 Stradbroke Dreamtime, a collection of short stories by Kath Walker, later Oodgeroo Noonuccal, first published in 1972 (Can be accessed through the National Library of Australia)

It was in 1988, after reflecting on the advancements, or rather lack of, of land rights legislation by successive Federal Governments that Kath Walker and her youngest son Vivian, changed their names to ‘Oodgeroo’ (which means ‘paperbark tree’) and ‘Kabul’ (meaning ‘carpet snake’) Noonuccal respectively. Vivian pre-deceased his mother and when Oodgeroo Noonuccal passed away in September of 1993, she was buried beside him at Moongalba. It is said that, when the barge was taking the hearse and the mourners over to Minjeeribah for the burial, the captain of the barge called people to the bridge and pointed out something he had never seen before. Two whales were swimming in front of the vessel, all the way to the Island, before which they peeled away, as if their escort was now finished. 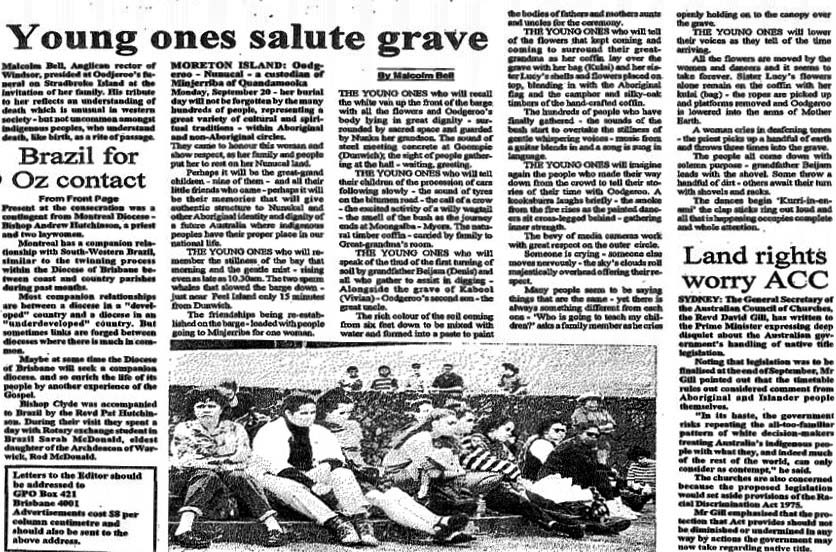 The Burial of Oodgeroo Noonuccal, as related by The Rev’d Malcolm Bell, in the October 1993 issue of Focus (Image courtesy of the Records and Archives Centre, ACSQ)

So how did Oodgeroo Noonuccal become so connected to the Anglican church at Dunwich? I was unable to find her name in parish papers, or any parish rolls – in none of the usual records of parish life. However, as I was going through the papers relating to the North Stradbroke Island parish, I noticed that in 1973 a committee was established to try and save St Mark’s, which had been earmarked for demolition. We have the minutes for the first meeting of this committee, extremely faded, that shows that Bishop Wicks served as Chair and that a ‘K. Walker’ was present. Beside K. Walker was a ‘Mr and Mrs Dixon’ (Bonty and Vi) and a ‘Mrs. F. Coolwell’. These names are important, as I was also able to find a copy of the photograph I had seen in the Brisbane Diocesan Newsletter. This image appeared in a local Redland newspaper, and had the names of the people pictured. Next to Archbishop Arnott was Kath Walker (confirming this was indeed Oodgeroo Noonuccal), a Florence Coolwell and a Mrs Vi Dixon. It seems that the Archbishop was standing next to a large section of the committee that helped save the church. So perhaps that was it, I surmised, perhaps that was the sum total of her connection with St Mark’s. Perhaps she helped save a local landmark and then donated some items to it. There was, however, another twist.

As I was going through some more parish papers for North Stradbroke Island, I came across an article about the death of Florence Coolwell at the age of 84 in 1994. In the first paragraph were written the words, “…elder sister of poet Oodgeroo of the Noonuccal tribe…” This sister of Oodgeroo Noonuccal had been a stalwart of the Anglican Church on Minjeeribah and her funeral was presided over by The Rev’d John Steele at St Mark’s, Dunwich. It seems possible then that Oodgeroo’s connection to the church through her sister, a devout and devoted parishioner of St Mark’s, was the reason she donated her works to their tiny island church. 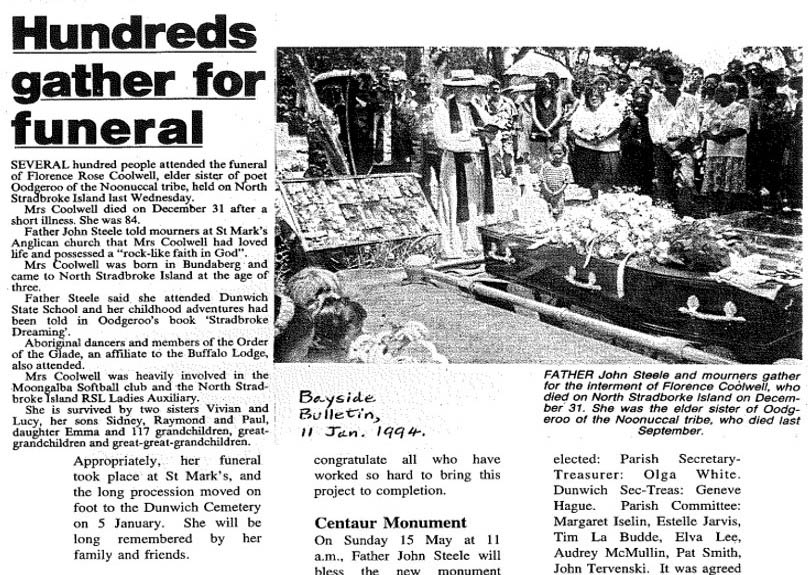 The funeral of Florence Coolwell, elder sister of Oodgeroo Noonuccal, as told in the Bayside Bulletin, 11 January 1994 (Image courtesy of the Records and Archives Centre, ACSQ)

There was one final Anglican connection. According to the wishes of her family, it was an Anglican priest, The Rev’d Malcolm Bell, who presided over Oodgeroo’s own funeral. In the October 1993 edition of the Focus newspaper, The Rev’d Bell writes of his experience at this funeral. He talks of how perhaps it will be Oodgeroo’s nine great-grandchildren, the young ones, that will speak of her:

“The young ones will imagine again the people who made their way down from the crowd to tell their stories of their time with Oodgeroo. A Kookaburra laughs briefly – the smoke from the fire rises as the painted dancers sit cross-legged behind – gathering inner strength.”

In John Collins’ obituary of Oodgeroo Noonuccal, a section of a speech she made at the Australian National University in Canberra is reproduced. It seems fitting that this champion of the power of words and the rights of her people should have the last word. While she may not have been a ‘parishioner’ of St Mark’s, as was claimed in the Brisbane Diocesan Newsletter image caption, her commitment to helping her sister save St Mark’s, Dunwich, and her artistic contributions to the church, should be cherished, as a connection between our Diocese and this remarkable Australian: 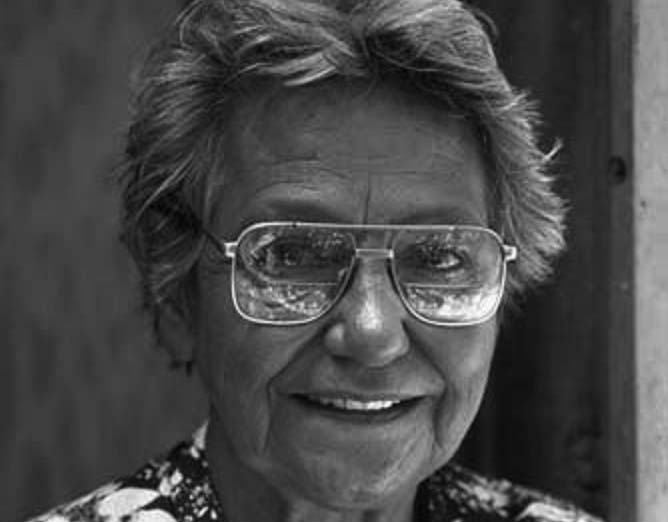