Advent, observed by most Christian denominations as the beginning of the Liturgical Year, is very fast approaching. Advent, this year beginning on Friday 28 November, is a time of expectant waiting in preparation for the celebration of the nativity of Christ.

The late David Alan Binns (1942-2008), who was an Anglican priest and prolific artist in our Diocese, used his art as a teaching tool. His artworks were often redolent with images of the story told in the everyday. One particular series, Saints in the Suburbs, inspired by the nativity narrative and painted by David for exhibition in Cathedrals Week in 2002, is returning to the Cathedral of St John the Evangelist during this coming Advent season.

In this colourful series of eight very large paintings drawn from the infancy narratives of the Gospel and appropriately named Saints in the Suburbs, David eschewed portraying historical accuracy, instead focusing on present-day incarnational subjects. Like artists of the Medieval and Renaissance Church, David visualised sacred stories in the here and now, and so his works are set in Brisbane at the beginning of the third millennium. The importance of these artworks is the holy in the everyday, the saints who live in our everyday lives, bringing the nativity story to us as if it is our own. For this series, David used the medium of acrylics on canvas, with one including gold leaf.

David’s work spanned several mediums, including silk screen prints, inks, watercolours, acrylics on canvas and card, designs for woodcarvings, stained-glass windows and textiles – such as for the Cathedral Lady Chapel cushions, vestments, banners and altar frontals – many logos (some of which are still in use in the Diocese and beyond), and much more. All expressed his endless imagination. Many commissioned works adorn several school chapels and parishes in our Diocese. His early hand-cut silk screen prints, again with a Biblical theme, were first exhibited in the Cathedral in 1974. Over the decades of his life, David’s drive to create art was paramount (often executed in the wee small hours of the morning). David exhibited widely, both in Australia and overseas.

The Saints in the Suburbs artworks are being gathered from far and near for this exhibition. One, The Magnificat, is owned by St Hilda’s School in Southport; The Adoration of the Shepherds is owned by St Francis Theological College; while others, privately owned or on loan, will come from Toowoomba and locally. As a result of the impending sale of the Old Friary (where David was Director of the Brookfield Centre from 1991-2004), five of the Saints, which had been hanging there, were relocated in December last year for display in the Cathedral during the Advent and Christmas seasons. Subsequently, three now reside at St Francis Theological College where David was Chaplain (1982-1987), two of these on loan, and two are on loan to St Aidan’s Anglican Girls School where he was also Chaplain (1988-1992).

The Adoration of the Shepherds was purchased in 2002 and gifted to the Brookfield Centre by Barbara Gillham in memory of her late husband. When ownership of this painting passed to St Francis Theological College, the Gilham family took the opportunity to replace the plaque to specify it was now in memory of both of their parents and were very glad to know that The Shepherds, along with other Saints, will continue to be valued and seen by staff and students, as well as many others in the years to come. Hopefully, bringing together the set of eight Saints for display during the Advent and Christmas seasons will once again place the nativity story in the heart of Christmas.

There is no doubt that David would love that his Saints in the Suburbs series will be exhibited once again in St John’s Cathedral, where he was once Precentor, bringing the nativity story to life for us all.

Saints in the Suburbs will be on display in St John’s Cathedral during Advent until January 2022. 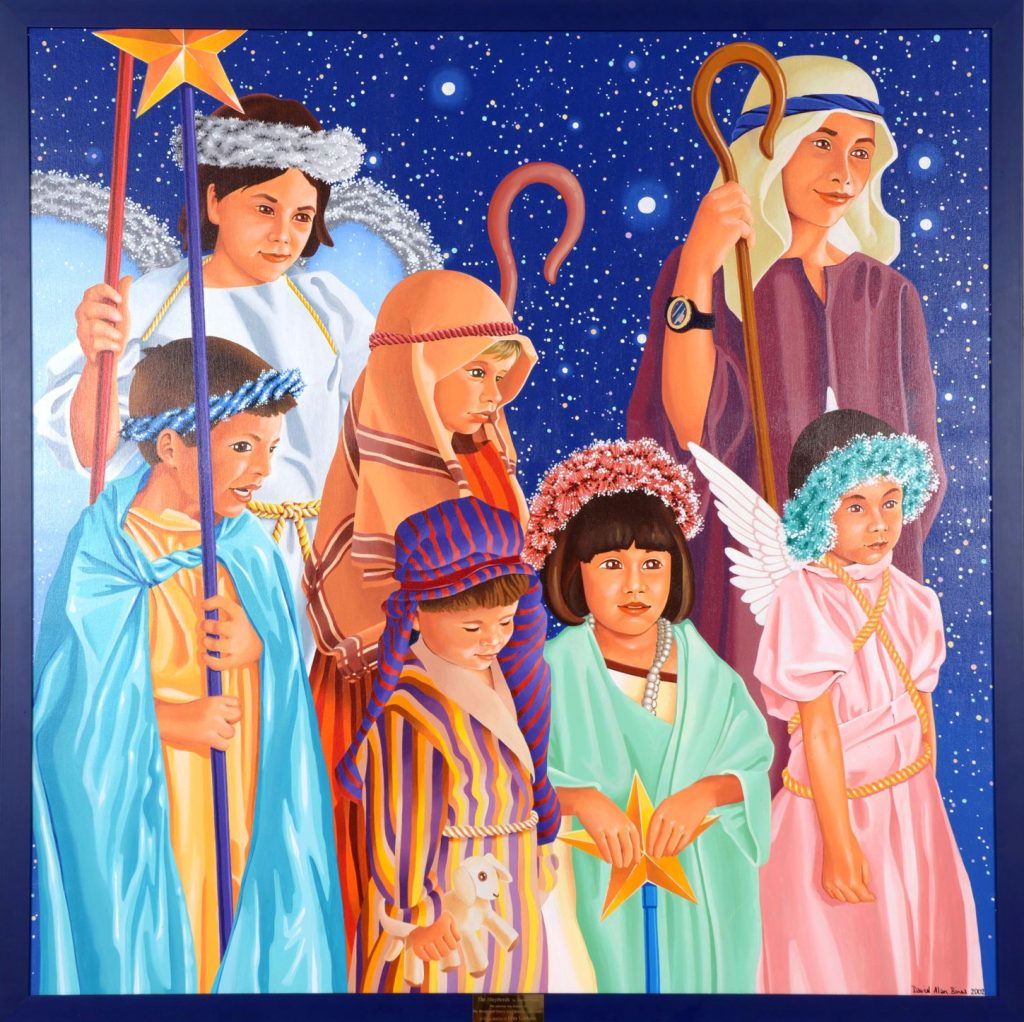