I was the first Bishop of the Diocese of Duk. The Diocese was established to bring peace to the area – fighting existed between tribes as a result of ethnic conflicts fueled by colonialism’s long-term impacts. It was discerned by the Christian community there that a new Diocese would help bring the Word of God, and therefore peace, to the region.

I was reluctant to take on the role as Bishop when I was asked; however, the leaders of the community in South Sudan decided they wanted me even though I was living with my family in Toowoomba at the time.

I originally moved to Toowoomba in 2003 after being granted refugee status in Kakuma Refugee Camp in north-west Kenya. I fled what is now South Sudan in 1986 and lived in Ethiopia for six years. In 1992 I fled Ethiopia to Kakuma Refugee Camp where I stayed for nine years. I met and married my Godly wife Rachel in the refugee camp. 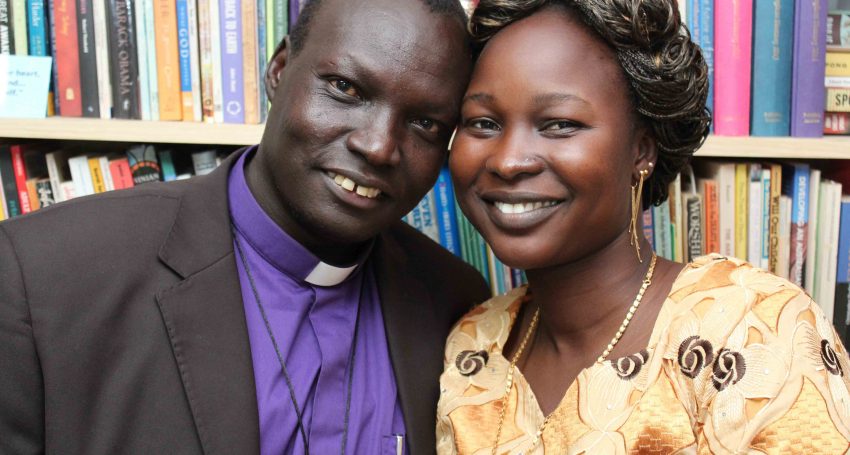 I gave up my paid work in Toowoomba as a cultural liaison officer with Education Queensland in order to serve as Bishop of the Diocese of Duk. I served as Bishop in an honorary capacity for just over eight years. During most of this period, I lived in South Sudan while my wife Rachel and our seven children continued living in Toowoomba. Rachel supported my family and me financially and in every other way while I was serving in this honorary capacity. She was my family’s rock during this time. She was a great helper and support. I will always be grateful to her for her selflessness and I thank God every day for bringing us together. 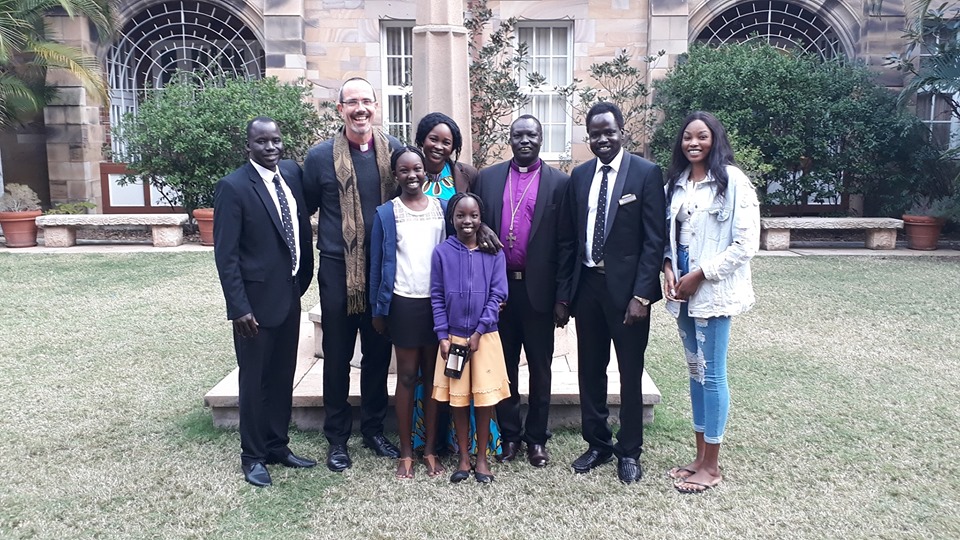 Bishop Daniel Abot (third from right) and spouse Rachel Jimma (third from left) with three of their daughters, Bishop Cam Venables and other participants at the South Sudanese and Sudanese Prayer Service on 7 July 2019 at St John’s Anglican Cathedral

In my role as Bishop, I worked with the United Nations to implement peace and reconciliation initiatives; set up an orphanage in Uganda for South Sudanese children; fundraised for formation students at the theological college; and, started work on programs to prevent child trafficking. I also fulfilled the usual pastoral, liturgical and ordination functions of a Bishop. I am grateful to Anglican Aid Abroad, Anglican Men’s Society, St Bart’s in Toowoomba, St Mary’s Anglican Church in Adelaide, St John’s Anglican Church in Dalby, HumeRidge Church of Christ and other good friends of Duk who are variously supporting these critical initiatives. 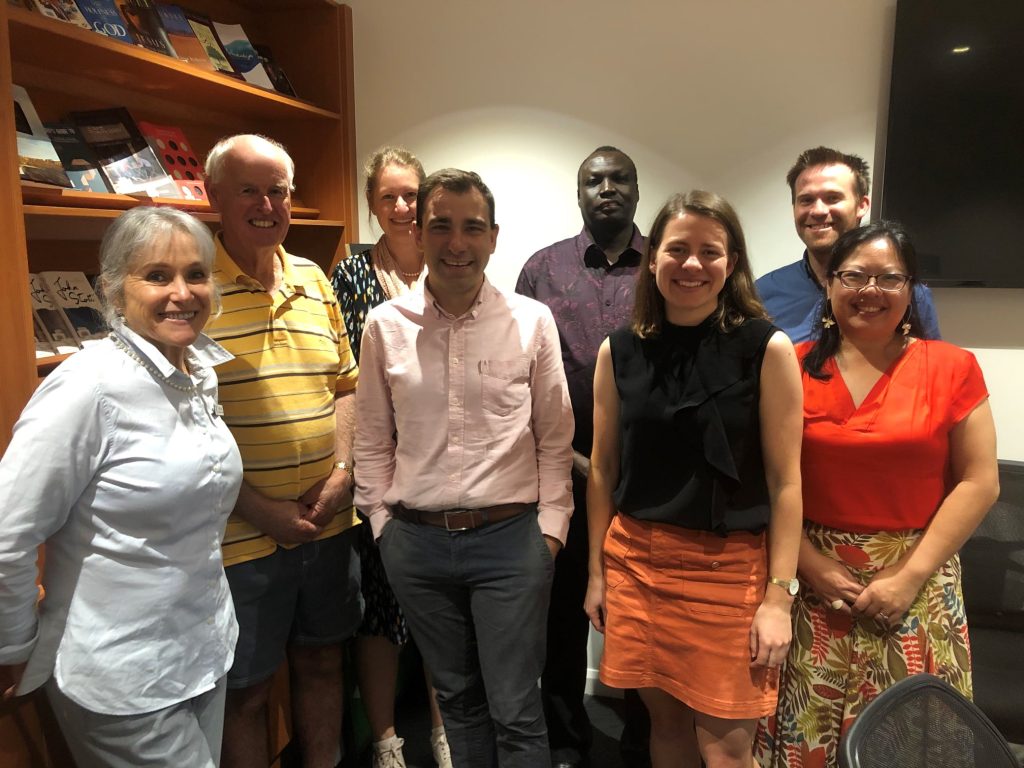 I was visiting my family in Toowoomba when the international borders closed due to COVID-19. This meant that I needed to serve as Bishop remotely. During this period I realised that there are huge ministry and pastoral needs in the Sudanese and South Sudanese communities and other nationalities as well in Southern Queensland. During this time, I was invited to take on the paid role of Resource Church specialist in our Diocese’s Parishes and other Mission Agencies Commission (PMC). Being able to financially support my seven children and my wife through my PMC role has been a huge blessing. Spending time with my family during the time of international border closure also reinforced to me how much Rachel and our children need me.

Given the enormous ministry and pastoral opportunities here and my family’s need to have me with them each day, I considered it best to hand back the Bishop of Duk Diocese role. It’s important to note here that this isn’t a decision I could make myself. In my culture people have a collective consciousness. This means that I can’t make important decisions impacting my community alone. Just as I couldn’t refuse the role as Bishop, I couldn’t decide as an individual to resign from the role. In order to hand back the role of Bishop, I needed to travel to South Sudan for three months earlier this year so I could consult with Episcopal leaders, other clergy and lay leaders, government representatives and other officials, congregation members and my extended family. 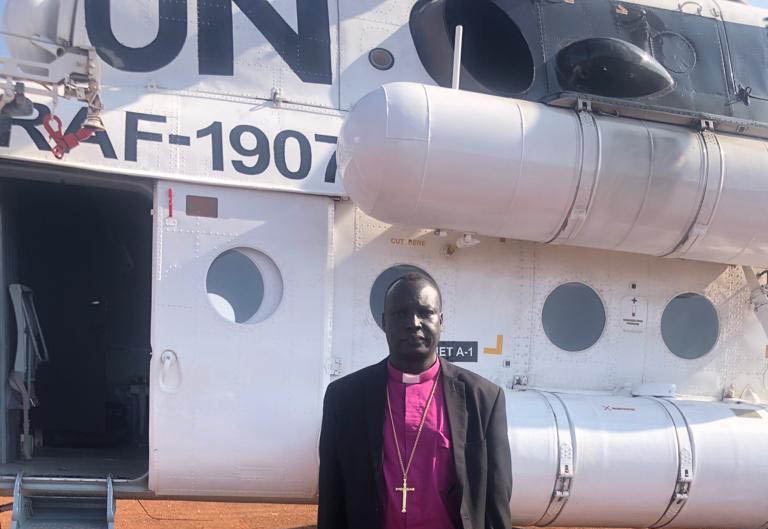 While Bishop Daniel was in South Sudan in early 2022 consulting about the handing back of his Bishop role, the United Nations requested his assistance with peace talks

Because I went to South Sudan at a dangerous time when there was renewed tribal violence and flooding-induced famine, non-South Sudanese colleagues and friends found it very difficult to understand why I needed to go. One of my PMC team members was very worried about me and asked a South Sudanese elder, Abraham Kirr, before I left if he was worried and what he thought. He explained to her that I encountered a lot of danger seeking safety as a refugee travelling as a child from my home to Ethiopia and then to Kenya, including encountering wild animals, enduring cholera and malaria, running from gunfire and bombing, and experiencing dehydration and starvation. He said that God had always protected me. He also explained to her that I can’t make decisions alone – that in our culture, people make decisions together via consultation and consensus. She then understood that I have a higher threshold of risk and danger than most other Australians and that my community’s needs are paramount. 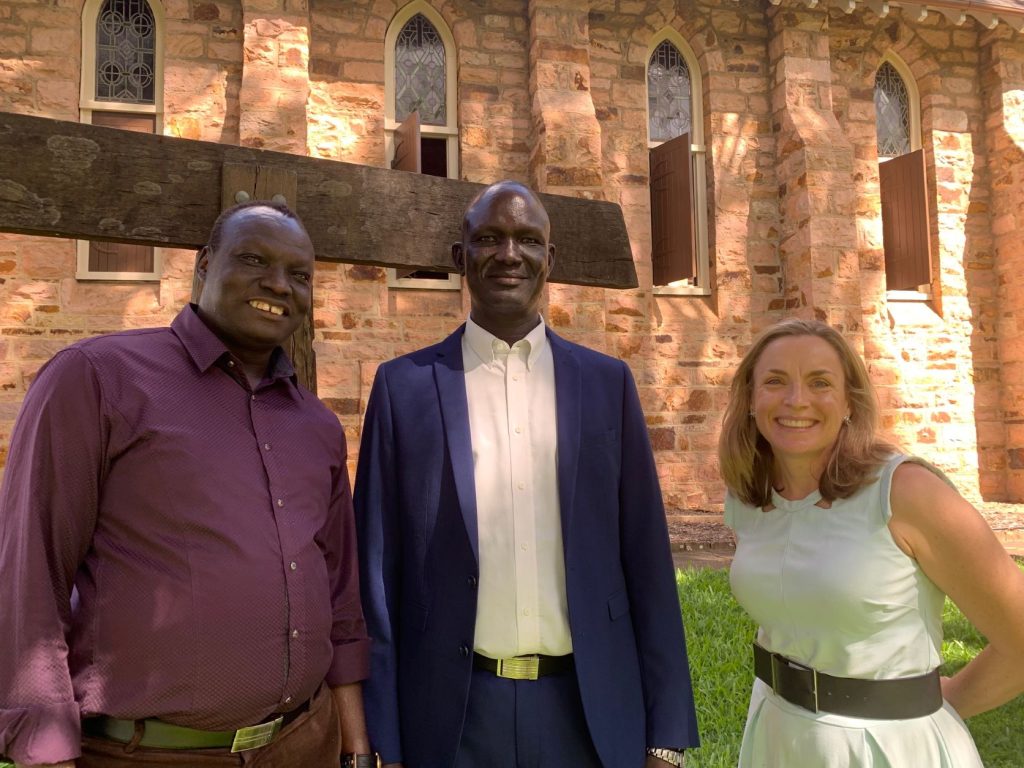 “Before I left in March 2022, senior elder Abraham Kirr (centre) explained to PMC team member Michelle that I can’t make decisions alone – that in our culture, people make decisions together via consultation and consensus”

A number of friends and colleagues from the non-South Sudanese community here tried to talk me out of going. They recommended that I instead just write a letter to the Primate of South Sudan advising of my resignation. However, this approach is contrary to my community’s consultation and consensus processes. It would have been seen as a betrayal and dereliction of duty, bringing shame on my family here and in South Sudan, if I had merely written a resignation letter.

In South Sudan, I first consulted with Episcopal leaders, including the Primate, over four meetings. I gave the Primate a letter written by Bishop Cam, which explained the need for me to serve here full-time in Southern Queensland and expressed support for me to do that. After I met with the Primate, he wrote a letter for me to give to the Diocese of Duk explaining why I needed to hand back the role. 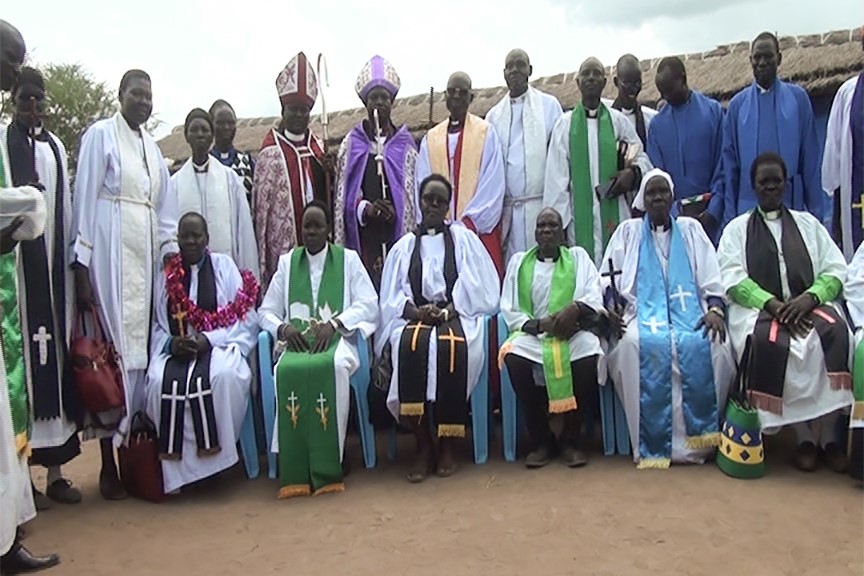 I then met with the Standing Committee of clergy, lay leaders and dignitaries (such as county commissioners and Members of Parliament) in the Diocese over four meetings. The first meeting was very emotional because it was the first time that the news was broken to them – most of the meeting participants cried. After I met with different cohorts of important people the Standing Committee sent a letter of acceptance and support in reply to the Primate. 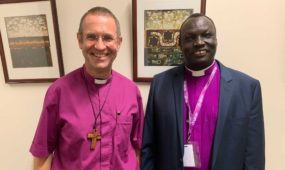 After meeting with the Standing Committee, I consulted with tribal chiefs, local government representatives and other local officials, who also reached a consensus after five meetings. One of these government representatives is an elderly man who represents the four counties of Duk as a government official. He told me that handing back the role of Bishop is a good thing because the Australian South Sudanese community needs me. He said that the people of Australia and Sudan and South Sudan have always had a closeness, explaining to me that he was baptised by an Australian missionary in 1963 who used Dinka at the service. The consensus of the chiefs and officials was added to the letter written by the Standing Committee to the Primate.

After meeting with chiefs and officials, I consulted with congregations during several meetings and also with my extended family twice. After meeting with my family, I realised that I needed to prolong my trip for another month so I could consult properly with them and give them time. My father was very supportive. He is a highly respected community leader because he was a freedom fighter for the South Sudanese people, reaching the rank of Major General. His words carry weight. He is also a prayerful man and he prayed for me at the final family meeting to give me his blessing and strength. Words of the congregations’ and family members’ support were also added to the Standing Committee’s letter to the Primate. 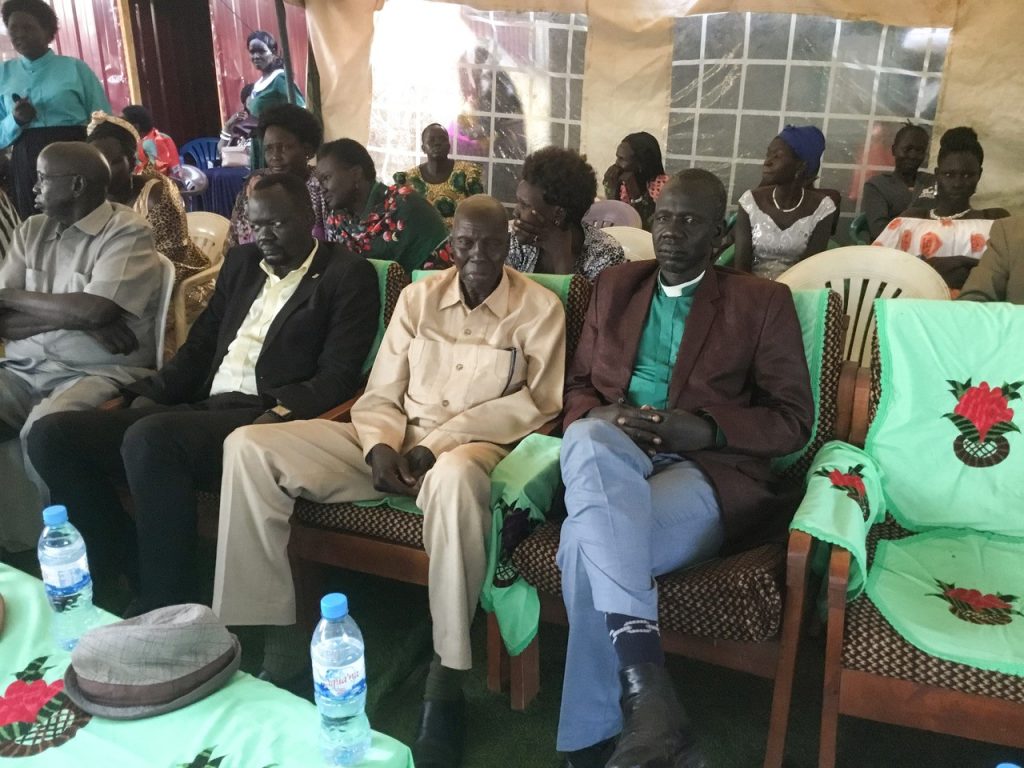 “My father was very supportive. He is a highly respected community leader because he was a freedom fighter for the South Sudanese people, reaching the rank of Major General” (Bishop Daniel’s father is pictured centre front, 2022)

After all of these meetings, the Standing Committee’s reply letter was sent to the Primate saying that a consensus had been reached across the various important groups. The letter explained that God’s will had been discerned, and that an agreement had been reached about me handing back the role of Bishop so I could more fully serve the Australian Sudanese and South Sudanese diaspora.

While I was away, I really missed my family, community and colleagues. I was only able to contact my family, Australian South Sudanese community members and my colleagues periodically due to phone access constraints. The trip was emotionally and physically exhausting. I was strengthened by the encouragement and assurances of prayer I received during phone calls to people like Rachel and my children; Bishop Cam; formation student Mamuor Kunpeter; chaplain The Rev’d Peter Mayen; and, PMC team members Stephen and Michelle. 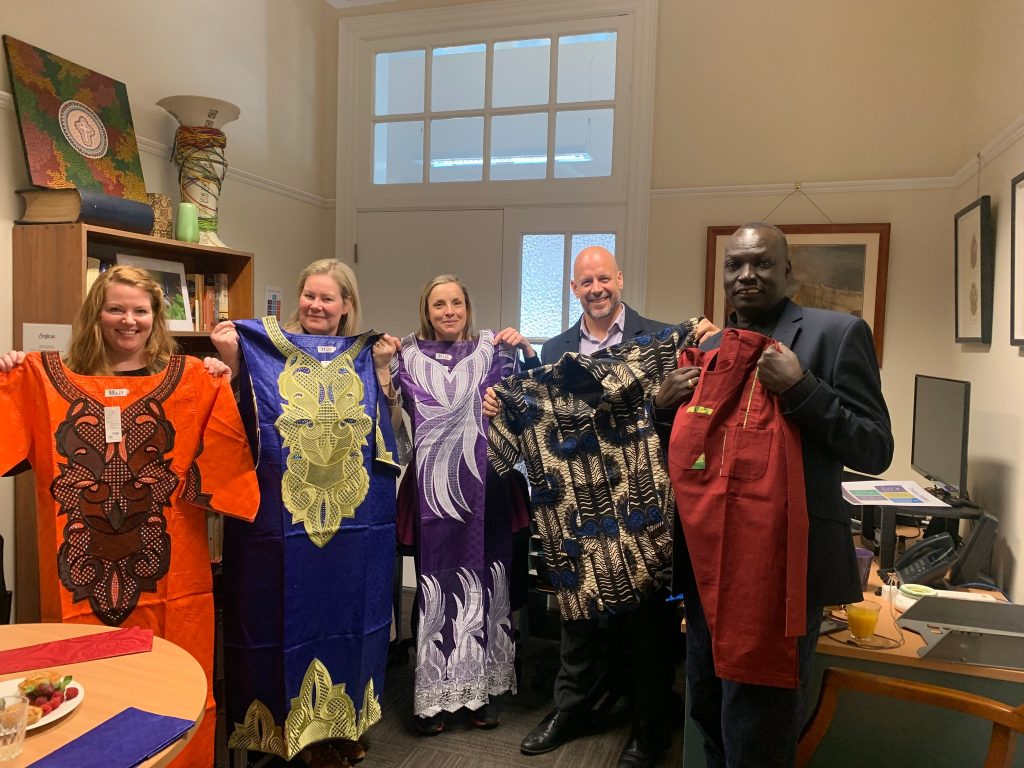 In true Bishop Daniel style and despite the rigorous trip schedule, he still found time to buy gorgeous gifts for his fellow PMC team members (June 2022)

As I write this reflection in early July, I am grateful to all those who prayed for me while I was away. I also thank the Anglican Church Southern Queensland for entrusting me with the Resource Church specialist role, which I am really enjoying. I also extend my heartfelt thanks to the Diocese of Duk for supporting the Sudanese and South Sudanese communities here and allowing me to hand back the role of Bishop. Most of all, I would like to thank Rachel and my children for releasing me to serve as the honorary Bishop of the Diocese of Duk for over eight years.

Later this year, Rachel and I will be returning to South Sudan so we can formally hand over the role and responsibilities to the new Bishop and his wife.