On the first day of the Lambeth Conference during a Bible study group for Bishop spouses, I noticed that there was another South Sudanese woman at a table who was unable to understand what was being said. I asked Bishop Cam’s wife, Kate Venables, if I could bring her to our table so that I could translate for her. Of course, Kate agreed that could go and get her.

So I went to her table and spoke to her in Dinka. This is what we said:

“Are you able to hear what is being said?”

“Are you happy to go to our table with us.”

As I started translating for her in Dinka, more Dinka women were brought to my table so I could translate for them also.

In the middle of the Bible study, we found out that some of the Dinka women had toiletries and medication thrown out at the airport.

So Kate, an English woman in our Bible study group, named Sue, and I bought the toiletries and pharmacy medication they needed.

Kate also bought eye glasses for seven people, so they could read the study resource.

I observed the generosity of people like Kate and Sue who saw how lost the Dinka village women were in such a big city. Their care made me think about Matthew 25.36:

“I was naked and you gave me clothing, I was sick and you took care of me…”

I translated at events, including at the Bible studies and discussion small groups.

I translated for the Worldwide President of Mothers Union, Sheran Harper, when she preached. I also introduced the Dinka women to her, so they could thank her for the preaching and for visiting South Sudan a few years ago. 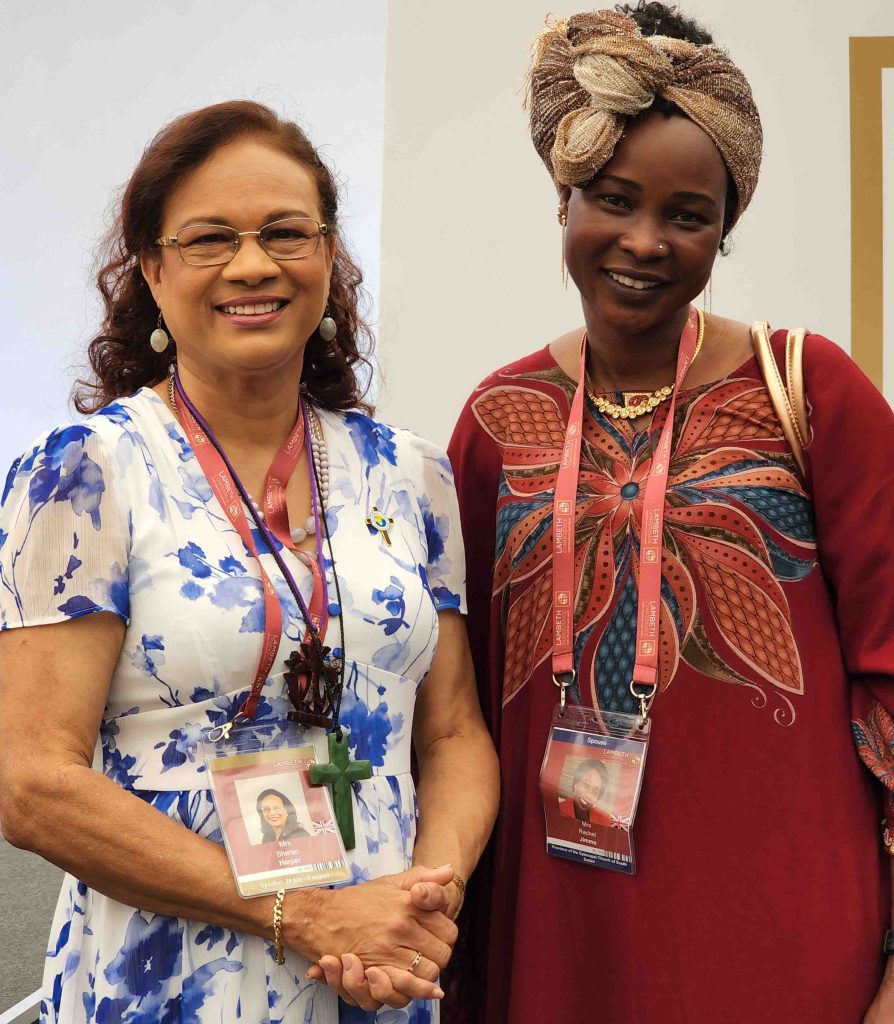 Rachel Jimma and the Worldwide President of Mothers Union, Sheran Harper, after a Bible study session at the 2022 Lambeth Conference: Rachel translated for Sheran at the conference

I also walked around with Caroline Eaton, the Archbishop of Canterbury’s wife, as she met and organised people.

Mumma Caroline, as everyone called her, opened the Bible study daily.

The Bible study sessions were focused on the Book of 1 Peter.

So the two Archbishops spoke about 1 Peter 5.8, which says:

“Discipline yourselves; keep alert. Like a roaring lion your adversary the devil prowls around, looking for someone to devour.”

After the video finished, the Archbishop of Canterbury got up and spoke to us all. He asked everyone in the room to discuss two questions:

Our group facilitator, Kate Venables, led us in the conversation, asking the group how we experienced lions in our lives.

So I translated the stories of two Dinka women from the same village in our group who said that when they were young girls, they used to look after the cows. In Dinka families, if there are no boys, the girls have to look after the cattle. They spoke about how they protected the cows from lions, even from the age of six to 14.

One of the Bishops’ wives shared about how she protected a cow from being eaten by a lion as a young girl. The lion jumped from a tree onto the back of a cow. She banged tins together and jumped up and down and yelled to scare the lion. The lion ran away.

The woman then shared the Dinka proverb that says, “A silent lion is dangerous because you don’t know which direction it is coming from.”

The moral of the woman’s story is that we have to always be prayerfully prepared for what we don’t know is coming. 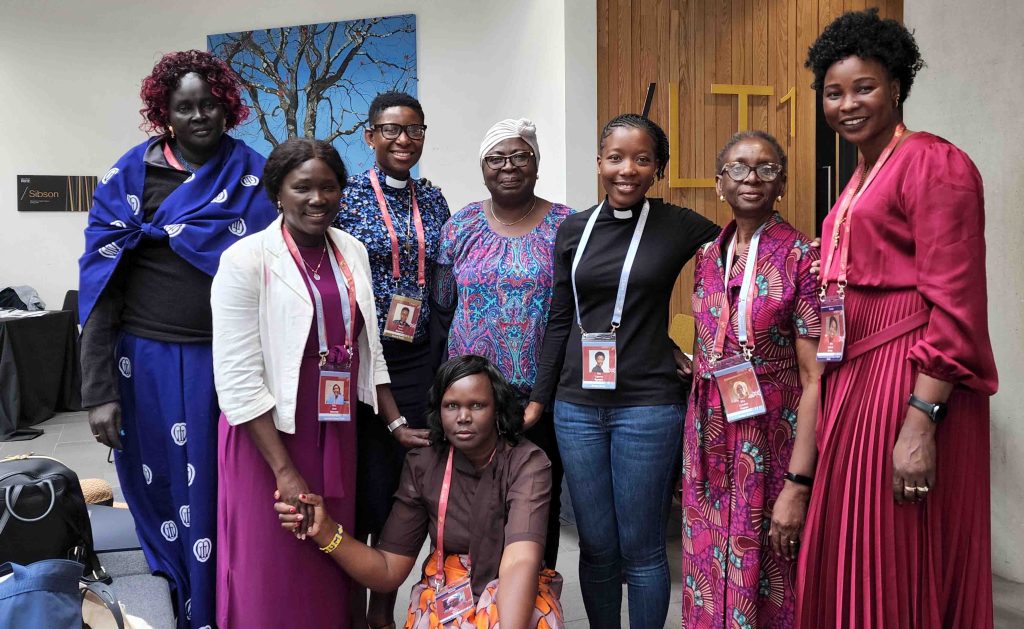 Rachel Jimma (far right) translated a story for one of the Bishop’s wives (far left, back) about how she scared lions away to protect cattle as a young girl. They are pictured with Jane (far left, front), who is married to the new Anglican Communion General Secretary Bishop Anthony Poggo, and the President of the Mothers Union in South Sudan (next to Rachel)

Towards the end of the conference, Sue thanked me in tears for helping to make sure the Dinka women were included and able to share their stories. She said that I helped make the group special so both Dinka and English speakers could understand each other.

Sometimes in life you think you are the only one experiencing something difficult. Hearing other people’s stories gave me hope and showed me how good it is to come together as a family of believers. Sharing our stories was like watering each other’s trees. 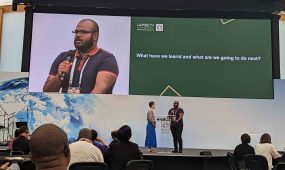 “God really showed up at the Lambeth Conference”

The way I see it is that we are holding each other’s hands as we keep walking together.

The whole Anglican Communion is a true family. 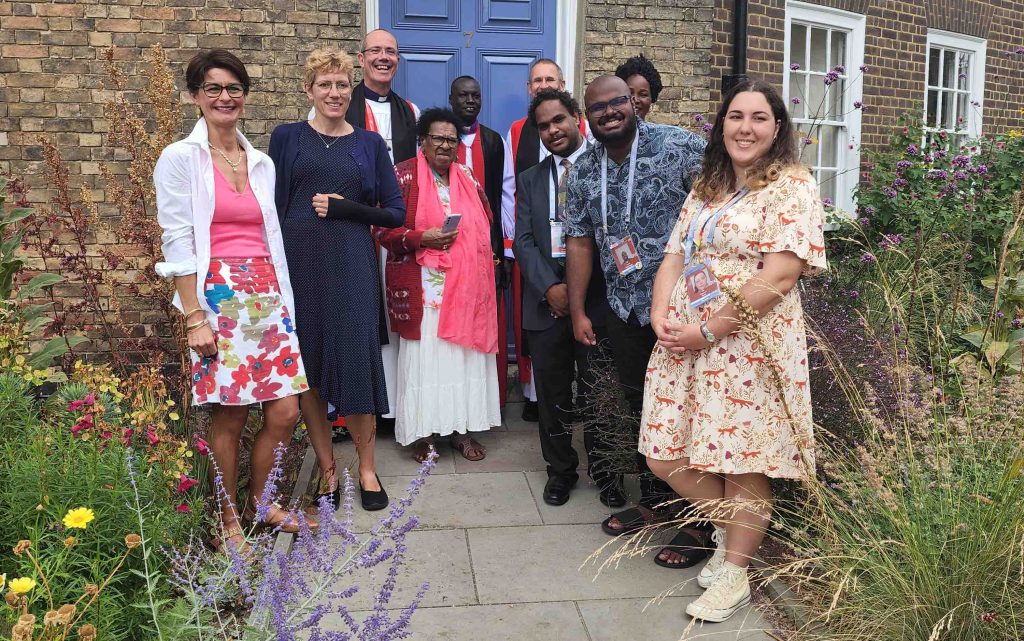