Areej Masoud, a Palestinian Christian, came to Australia in 2018 on a speaker tour hosted by PIEN. Many of her stories and her words have stayed with me. I recall her words about hope:

“Each morning you must wake up and find your own hope.”

But these are not magic words. How is this done? Hope lies in various places and in ways of thinking and doing and being.

First, a small but powerful recollection from when I visited Gaza in 2015. Israel’s war on Gaza in 2014 left many homeless and many buildings destroyed. In the first photo, above, which the young boys wanted me to take, you can see the remains of a multi-storey hospital. The boys lived amongst such destruction, but they had not lost their hope: a hope that things could be “normal”. For them that day, hope lay in being with friends, a lively conversation with a stranger and hopefully food to eat.

So hope can lie in daily life. Again, not a sure-fire formula. The odds can be stacked against you. I awoke this morning to news of a rocket strike from Gaza into Israel, in response to a missile strike from Israel that killed ten people, a child amongst them (fatalities will have risen as you read this piece). The cycle of violence continues. Only peace with justice will bring new life to Israelis and Palestinians; without that there can be no hope of peace and “security”, an oft-spoken word.

Daily life all over the world often revolves around work and food. Looking at the second photo, we see the work that this man does, growing strawberries for all to eat. Taken in Ramallah, this photo captured for me that element of life going on. But what I would never know was how hard it had been for this man. Often Palestinian farmers are cut off from their land by the Separation Barrier, a stark feature of occupation, which can go between town or village and fields. Agricultural gates can be closed at random and permits denied or delayed. 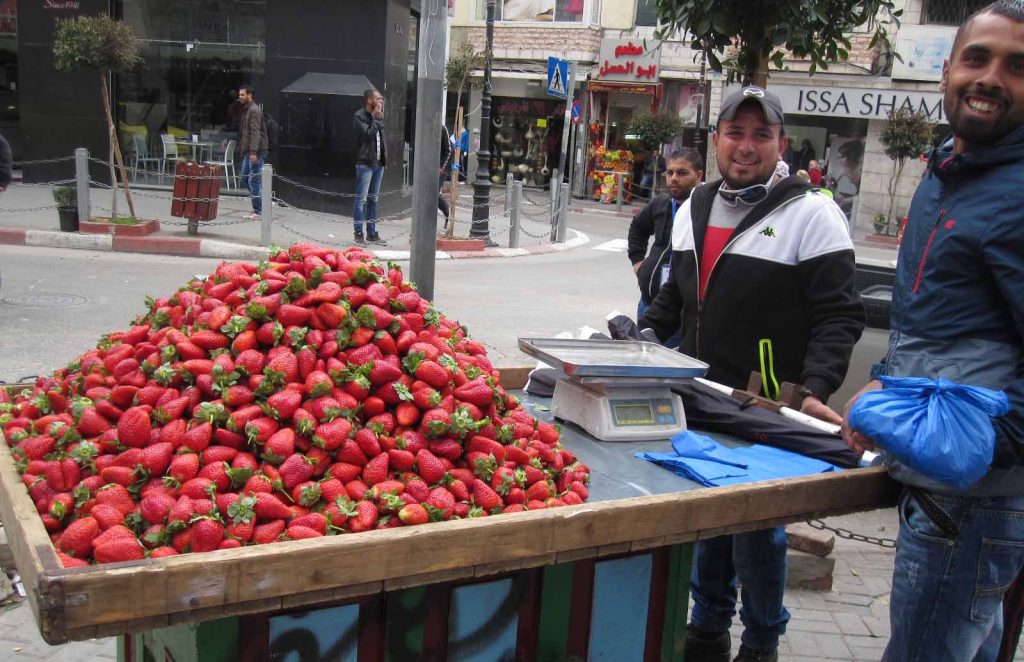 “Taken in Ramallah, this photo captured for me that element of life going on. But what I would never know was how hard it had been for this man. Often Palestinian farmers are cut off from their land by the Separation Barrier” (Helen Rainger)

For the Palestinian people, hope lies in not being bowed down, but attempting to live life with dignity. And, the strawberries were delicious.

Finally, as has been expressed to me, hope for the Palestinian people, and hope for peace for all, lies in the telling of the story. That is what we as visitors were asked to do.

“Go back to your home and tell our story.”

If you are pray-er, pray; a writer, write. Talk to your friends and to politicians. Hope lies in us being impatient with the status quo, which allows violence to go unchecked and could cause hope to die. Palestinian Church leaders issued the well-known Kairos Document in 2009, titled “A Moment of Truth”, issuing a cry of hope, within a (seemingly) hope-less situation. Hope in action…

Editor’s note: First published on the UCA website on 26 August 2022 as part of a series of reflections for the World Week for Peace in Palestine and Israel, which will be observed between 15-22 September 2022. Reflection amended for anglican focus with additional links.