Have you ever had a penpal?

Have you ever had a penpal? I had one when I was in primary school. She was a Canadian girl with long brown hair and freckles. We used to write to each other with ACTUAL pen and paper. Our friendship didn’t last long and we forgot about each other pretty quickly. Still it was nice to experience what it’s like to have a faraway friend even though we would never get to meet.

I’ve had another (digital) penpal since then. Someone told me about a young refugee man when I was with some friends praying outside an MP’s shopping centre electoral office for humane treatment of people seeking asylum four years ago with Love Makes A Way, a group of Christians seeking justice for people seeking asylum. His name is Arad* and at the time he was living on Manus, a province of Papua New Guinea, where successive governments had decided to warehouse him indefinitely.

The man who told me about Arad was one of the staff who worked on Manus. He told me that Arad is an IT genius who can fix anything. And, that I should message him on Facebook because he really needs a friend. Now, I don’t normally message friends of strangers I meet at suburban shopping strips, but this time it seemed the Spirit was telling me to contact him. And I’m really glad I did.

We became friends through Facebook Messenger. Arad told me about his family and why as a persecuted ethnic minority he had to leave his home country to seek safety. I know in theory about the various reasons why people seek asylum, but there’s nothing like hearing it from a real person. Over the years I was privileged to be a listening ear across the seas. It broke my heart to listen to my friend’s sorrow, pain, fear, anxiety and worries, as he and his friends continued to be treated like political footballs, traumatised by successive governments’ broken and cruel immigration policies.

There was little I felt I could do for him, apart from the odd package of stuff he needed sent, praying for him and asking our politicians to show compassion for the men on Manus. All I could say was, “I don’t know what to say, but I will do anything I can to help you.” I continued to pray for him regularly over the years: in my personal prayer life; at church; and at MP’s offices with Love Makes A Way, and I told him that I hoped to meet him in person one day.

Well, my prayer got answered! A few months ago out of the blue, Arad messaged me to say that he is in Australia getting medical treatment! Soon after, I got to meet Arad for the first time. He is shorter than I’d imagined. And, he has a wonderful smile, despite everything he has endured.

After years of trauma, not only from fleeing persecution, but from years of indefinite incarceration on Manus (which was condemned by the United Nations because it “had severely negative impacts on health, and particularly significantly mental health, with 80% cumulative rates of depression, anxiety and PTSD among refugees forcibly transferred”), Arad was able to apply for specialist medical treatment in Australia through the so-called Medevac Bill.

What is the Medevac Bill?

There has been an ongoing medical crisis on Manus and Nauru for years now as a result of the human rights abuses of successive Australian governments. Like my friend Arad, many people seeking asylum are suffering from inhumane living conditions, with inadequate treatment for their physical and mental health. To ensure people get the urgent medical assistance they need, the Medevac Bill proposed that two independent Australian doctors can recommend their temporary transfer to Australia, but only when it is necessary to medically transfer them in order to provide appropriate treatment, which they are not receiving on Manus or Nauru.

It is important to note that by focusing on the wellbeing of people the Medevac Bill did not change Operation Sovereign Borders, boat ‘turn-backs’, or other elements of either the Coalition or Labor’s border policy, and does not provide for permanent resettlement in Australia. The Immigration Minister also has the power to refuse the transfer recommendation, and instead refer the decision on to the Independent Health Advice Panel (IHAP), which is comprised of independent doctors nominated by peak medical bodies.

As proposed and passed by Parliament earlier this year, the Medevac Bill process has been clear, transparent, enforceable and timely, saving lives including that of my friend Arad.

The Medevac Bill saves lives. We need to save it.

You can imagine my reaction when I heard that the Senate will vote in November on whether to repeal or maintain the Medevac Bill, with the Federal Government pushing for it to be repealed. Think about it: until the Bill was passed, medical transfers were hampered or blocked by delays and/or political obstruction. Until the Medevac Bill was passed earlier this year, people like my mate just had to keep suffering, with many people dying from either suicide or as a result of the government delaying or refusing the medical transfers of gravely ill people, including 27-year-old father Faysal Ahmed and 24-year-old Hamid Khazaei who both died in Brisbane after unnecessarily delayed medical evacuations.

Some want us to believe that the Medevac Bill is unnecessary, but I know it works. Arad is finally able to receive specialist treatment he’s desperately needed for years, and only because of the Medevac Bill. As a pharmacist I obviously believe it should be doctors, not politicians, making decisions about life-saving medical treatment for refugees on Nauru and in Papua New Guinea.

As a Christian, I fully support maintaining the Medevac Bill. There are a few reasons for this.

Why should Christians care about the Medevac Bill being maintained?

The Anglican Marks of Mission include: “To respond to human need by loving service” and “To seek to transform unjust structures of society, to challenge violence of every kind and pursue peace and reconciliation.” How we treat men, women, children, and families seeking safety is a chance for us to reflect God’s image in the world that Christ loved enough to die for. 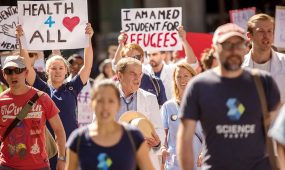 When my daughter had a very high temperature overseas years ago, I was very thankful for a doctor friend in that town who dropped what he was doing when he got my call and came to see her immediately. When you are away from home, there is nothing worse than being sick and not knowing what to do about it. For people like Arad who have been forced to permanently leave their home and need urgent medical care, Medevac is literally a life-saver.

What can we do?

These are a few simple ways we can help save lives by saving the Medevac Bill.

*Pseudonym used to protect his identity.