Atop a hill on the outskirts of Bethlehem in the occupied Palestinian territory, sits the Tent of Nations. Legally owned by the Nassar family for over 100 years, this farm is a beacon, drawing people to learn from this Palestinian Christian family how to live faithfully in the face of adversity. On stones at the entrance are written “We refuse to be Enemies — People Building Bridges” which is a mantra the Nassar family live by.

On the surrounding hills, illegal Israeli settlements have been built on confiscated Palestinian land. Despite the relentless attempts by the Israeli military and the settlers to evict the Nassar family through legal means, as well as by uprooting and burning olive groves and blocking their only access road, this family have shown remarkable resilience and commitment to non-violence.

The conflict in Israel/Palestine is largely couched in a perceived tension between Muslims and Jews, with little attention given to the Palestinian Christian community who are equally suffering with their Muslim neighbours, under the yoke of Israeli military rule. The Church’s presence in Jerusalem is constantly under threat and sadly Palestinian Christians are leaving the Holy Land in large numbers, with those remaining fearing that the Christian presence in the land of its birth will one day cease.

Pilgrims visiting the Holy Land have more freedom of movement and access to holy sites than do the local Palestinian inhabitants. The Israeli built Separation Wall isolates Palestinian communities, with the checkpoints and permit system adding further frustration and limitation on how far and for how long Palestinians can freely move around in their own country.

During religious festivals for Christians and Muslims, the Israeli authority has in recent years stymied Palestinians’ freedom to worship by limiting permits, placing quotas on attendees of sacred sites and blockading entrances. Aggressive actions by radical Israeli settlers vandalising church property have been on the increase. 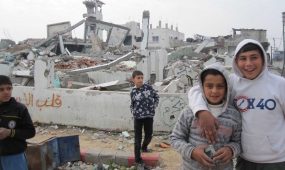 Palestinian Christians are crying out for the global church to turn its gaze upon their lived reality:

“We suffer from the occupation of our land because we are Palestinians. And as Christian Palestinians we suffer from the wrong interpretation of some theologians. Faced with this, our task is to safeguard the Word of God as a source of life and not of death, so that ‘the good news’ remains what it is, ‘good news’ for us and for all. In face of those who use the Bible to threaten our existence as Christian and Muslim Palestinians, we renew our faith in God because we know that the word of God cannot be the source of our destruction.”

Editor’s note: First published on the UCA website on 26 August 2022 as part of a series of reflections for the World Week for Peace in Palestine and Israel, which will be observed between 15-22 September 2022. Reflection amended for anglican focus with additional links.