Good morning, listeners. My name is Stephen Briggs. I am the Parish Priest at St Oswald’s Anglican Church in Banyo. I am also the Naval Chaplain for Southern Queensland based out of HMAS Moreton at Bulimba, along the Brisbane River.  It is my privilege to offer a reflection this morning; today being the 100th Anniversary of the signing of the Armistice of World War 1.

Today many people will gather around this ancient land at memorials, in community halls, in churches, in parks and in one another’s homes to honour the memory of those who have made the supreme sacrifice whilst serving our nation in times of war or peace-keeping operations. Today we offer thanks to God for the remembrance of the sacrifices made by the original Anzacs and others before and since them, and for the countless blessing granted to our people in times of peace and war.

As a Naval Chaplain, I would like to draw attention to the operations of the first Australian Submarines AE1 and AE2 and their crews. At the outbreak of World War 1, both were sent to German New Guinea to help force the surrender of the German Colony there. After the surrender of the colony, AE1 departed on the 14 September 1914 and was not seen again until she was found off Duke of York Island in December of last year. She was lost with her entire crew of 35, seven months before the landings at Gallipoli Cove. During the Gallipoli Campaign, AE2 was on station in the Dardanelles and was tasked to prevent enemy shipping transporting supplies to the Turkish troops on the Gallipoli Peninsular. She was lost in action on the 30 April 1915, with her crew spending the next three and a half years until the Armistice in a Turkish prison camp. Four of her crew died whilst in captivity.

Whilst Remembrance Day recalls the tragedy of World War 1 and the hope for worldwide peace, the further conflicts of the 20th and 21st Centuries have seen this hope largely unfulfilled. Tragically, Australian personnel have continued to die in combat and the numbers of physical, psychological and spiritual causalities continue to increase. As citizens of this nation we have a responsibility to provide ongoing care to military personnel and those who have been discharged because of the struggles they now face because of service rendered.  Those of us who are people of faith also have a responsibility to provide ongoing pastoral and spiritual care for those people. One of the greatest ways people of faith can support service personnel and veterans is to offer continual prayer and understanding. As a Navy Chaplain, I can affirm the peace and strength Defence members experience knowing that support and prayers are offered on their behalf.

Although today is set aside for intentional reflection of our service personnel, more frequent inclusion in our daily and weekly prayers is significantly important as the world continues to experience suffering and violence to which our service personnel are sent to respond.  Whether we agree or disagree with decisions and responses to current conflicts, our fellow Australians trying to bring about peace and make a difference in the world are worthy of our prayers.

I also encourage us to pray for the families of service personnel who wait at home with heavy hearts for their loved ones to return. Families can suffer greatly during deployments with this suffering often unacknowledged, let alone appropriately addressed. Like the woman who gave two pennies, Defence families continually give of themselves with little recognition.  Many service personnel have been deployed multiple times for extended periods. Much of a Defence Chaplain’s ministry is with the families of deployed members. There are great strains and stresses on mums and dads having to parent alone and children craving the love of an absent parent. When today we say in response to The Ode (which comes from the poem For the Fallen) “We will remember them. Lest we Forget” we might like to include in our remembrance the families of the fallen whose lives were never to be the same.

What of remembrance? Why is the legacy of the First World War still of such significance to us? Why is that conflict such a definitive moment in the imagination of so many? It was suggested by Rowan Williams, the previous Archbishop of Canterbury, that the reality of modern warfare aroused a bitter awareness of the gulf between its reality and the rhetoric and metaphors often used by the people comfortably at home. Those returning from the trenches found themselves almost incapable of talking about what they had seen and endured, because the language used by politicians and the press was language associated with chivalry and swords and knighthoods. This language bore no resemblance to the realities of trench warfare. The almost legendary language of swords and chivalry presupposed that glory in war was a wonderful, straightforward, righteous affair.  However, those who stormed beaches, fought in the trenches, were torpedoed at sea or flew over heavily defended countries understood that glory and real heroism had a great deal more to do with endurance, loyalty and the daily struggle to survive and maintain one’s integrity and humanity in the midst of unspeakably dreadful conditions.

Secondly, in modern warfare no one was out of reach – everyone was vulnerable, and is vulnerable. The ability to inflict destruction at unprecedented levels with earlier forms of protection and defence, now inadequate, meant that everyone was involved. The earlier rhetoric about war could not continue because the new reality of warfare changed our thinking from that of a glorious undertaking to a period where a solemn and sober sense of duty was called for, where people chose to enlist and in doing so supported what they saw as the lesser of two evils. Another previous Archbishop of Canterbury, William Temple, reflecting on his time in that position during the Second World War stated, “War in itself never produces a positive good, though it can restrain worse evils.”

We know something of how modern conflict involves us all through our awareness in the shadow of the terrorist threat of which we are continuously reminded and that some of us may have innocently experienced. Thankfully it seems we have developed a more adult approach to violence and conflict. We know people will find themselves in situations where their integrity and humanity are under constant strain, will be compromised, and that there is nowhere to hide from the consequences of conflict.

Perhaps our awareness of these things can bring us back to two Christian realisations.  Firstly, that glory is not won through aggression and success, but is understood as the radiance of truth which can shine out amidst suffering. Glory for Christians is shown on the cross where the integrity of unconditional love radiates out of a situation as horrific as that of the trenches of the First World War and the evils of the Second. Rowan Williams also suggests that those who spoke the most sense from a Christian point of view about the experience of the trenches were those who understood that within the trenches something of the cross was appearing to them and through them. Glory is life, integrity, humanity and wholeness. The Glory of God is a human being who is fully alive. That is very different from being a successful aggressor or even a successful defender. For us glory is something not only deeper and more complex, but more lasting and truer than the glory alluded to by those who love conflict.

Secondly, as Christians we are conscious of our interdependence and our calling into mutual service. None of us can hide from the consequences of humanity’s suffering, as it touches us all. The two world wars saw a renewed and deepened sense of commitment to justice and equality within our society because people understood just how deeply they were bound to one another and how deeply the wounds of another wounded them. 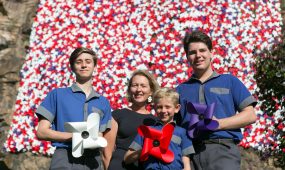 Glory and mutual dependence, glory as found in compassion – these are what Christ has shown us and are the most significant things we will ever experience. These realities are also part of what are discovered during conflict and helped form part of the legacy of war.

Today, as we intentionally remember those who served selflessly for the freedoms of not only Australians, but defenceless people of other nations, let us remember that we live in a world where the glory of God is a human being fully alive, so that our duty and our call is to help people come alive to God’s glory, whilst fully recognising that the suffering of one and the suffering of all cannot be separated.

In remembrance and gratitude, we give thanks for the yesterdays of others that have enabled our tomorrows, and may God give us the strength and clarity to work towards a more peaceful world. Amen.