This year marks the 800th Anniversary of the encounter between St Francis of Assisi and Sultan al-Malik al-Kamil, who ruled Egypt, Palestine and Syria during the Fifth and Sixth Crusades. The motivation behind St Francis’ 1219 visit to the Sultan was traditionally portrayed by his biographer Bonaventure as his desire for martyrdom and going across the enemy line between the Crusaders and the Saracens at Damietta like sheep amongst wolves. He so impressed the Sultan that, while he did not convert him to Christianity, he won his respect and the custody of the Holy Places and Shrines in the Holy Land.

Francis was a changed man from this meeting. In his Rule of 1221, the so-called Earlier Rule, he advised the friars to submit to the non-Christian authorities when they go among Muslims and others who do not practise Christianity, and not engage in disputes or disagreements, only proclaiming the Gospel when it pleases God.

Scholars have suggested that the ‘Angelus’ (a prayer commemorating the Incarnation) and the ringing of bells traditionally calling Christians to prayer three times a day at 6 am, 12 noon and 6 pm were inspired by Francis observing the call of the muezzin (the man who calls Muslims to prayer from the minaret of a mosque) five times a day.

Similarly, scholars suggest that St Francis’ Divine Praises, “You are holy, Lord, the only God, and your deeds are wonderful. You are strong, you are great. You are the Most High, You are Almighty…You are love, you are charity, you are wisdom, you are humility, you are patience. You are rest, you are security. You are inner peace, you are joy, you are gladness. You are justice…” was inspired by Islam’s 99 Most Beautiful Names of God (Al Asma ul-Husna).

Francis’ friendship with the Sultan challenges us today to seek ways to listen to and dialogue with Muslims and people of other faiths in a spirit of openness and collaboration.

So, who is St Francis of Assisi? Born in 1182 and died in 1226, the son of a successful and wealthy Italian cloth merchant and a French noblewoman, he was a care-free young man dreaming of being a knight in shining armour, the hero of his era! But the reality was quite the opposite when he ended up a prisoner of war after a conflict with the neighbouring city of Perugia. He began to question himself after this setback and the subsequent illness following his release from prison. His life was never the same again, as he eventually turned to God to his father’s great disappointment! On his way to another military venture, a voice in a dream asked him why he would choose to serve the servant rather than the Lord and he was told to return to Assisi and seek further direction from God.

Francis experienced a conversion process through his meeting with a leper outside the city walls below Assisi, and overcoming his fear and nausea of the dreadful disease, he embraced and kissed the wretched man! This was what he recalled in his Testament as the beginning of his life of penance. He sought solitude among the wilderness and woods, praying to God in the cavern. Eventually in the ruined church of San Damiano before the icon crucifix, he heard the painted image of Christ calling him to repair his house.

Bonaventure described Francis stripping himself of his clothes three times as he progressed in response to God’s call to conversion: exchanging his armour with the poor knight, his garments with the beggar in Rome, and finally totally naked before his father and the Bishop of Assisi. Only when he was stripped of his false illusions or masks could he be his true self before God, naked as when he was born and as vulnerable as his naked crucified Lord whom he loved. Francis covered his nakedness with the Bishop’s farmhand tunic, which he later changed to a hermit’s garb with leather belt and staff.

On hearing the Gospel being read for the feast of St Matthias about Jesus’ instruction to his disciples setting out without money or shoes or staff to preach the Kingdom of God and do penance, he changed again to the habit of a barefoot preacher with a rope in line with the apostolic mission. Francis exclaimed with joy: “This is what I want; this is what I long for with all my heart.” This process of discerning God’s will as we seek to serve God can be quite a journey of surrender, always being open to new direction because of God’s unconditional love for us.

When others joined Francis for his mission, he returned to the Gospels for guidance by opening the Bible three times revealing the three texts that came to shape his Franciscan community:

“If you wish to be perfect, go and sell all your possessions and give to the poor…and come, follow me.” (Matthew 19.21)

“Take nothing for your journey; neither staff nor knapsack, shoes nor money.” (Luke 9.3)

“Anyone who will come after me must renounce self, take up the cross and follow me.” (Matthew 16.24)

For Francis and his friars, and St Clare and her sisters who joined them, following Jesus would mean being without possessions and living in poverty, relying on God entirely for their needs and sharing in the humiliations, insults and sufferings of their crucified Lord, while living in perfect joy with God. Out of this love for God, Francis was to receive the stigmata or the wounds of his Crucified Lord on Mount La Verna as he totally identified with Jesus’ excruciating love for all creation. 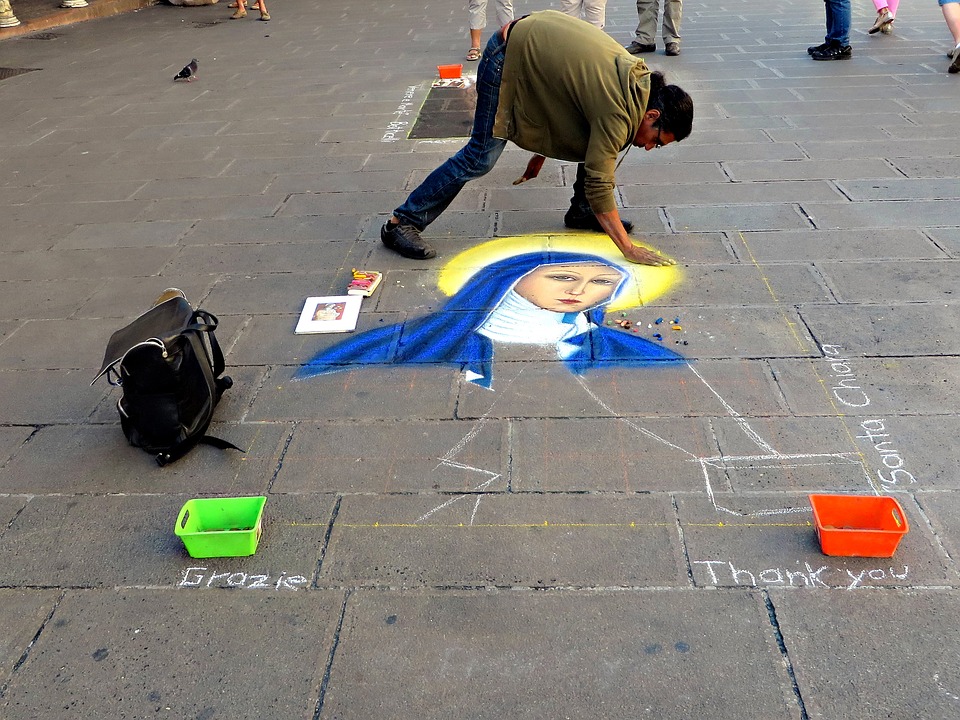 Like St Francis, St Clare of Assisi remains a popular figure in art and culture, as well as maintaining religious significance

In response to that same love, Francis composed the ‘Canticle of the Creatures’ while he was nearly blind and ill soon before he died, able to praise God with all creation, which he addressed as brother or sister: sun, moon, stars, wind, water, fire, earth. Indeed, his love of creatures included flora and fauna.

Francis challenges us today to not only take care of the environment, but also people who are poor and marginalised. Our lifestyles threaten all this; how materialistic our world has become. Do we need so many possessions to be happy?

St Francis’ Feast Day marks the end of the Season of Creation, which commenced on the first day of Spring.