When people think of London they typically think of Big Ben and Trafalgar Square; St Paul’s and the Tower; the Parks and Buckingham Palace. Some may know of theatreland, Covent Garden and Soho and Oxford Street. These well-known locations are all in the Archdeaconry of London. We have some residential areas in Paddington and Pimlico, and we end appropriately at Kensal Green. I have been here for five years following a stint archdeaconing in suburban north London before which I was, for 17 years, a vicar in Tottenham, an inner-city area which is so diverse the children in the school speak 75 mother tongues and mine were the only white British children in their class. 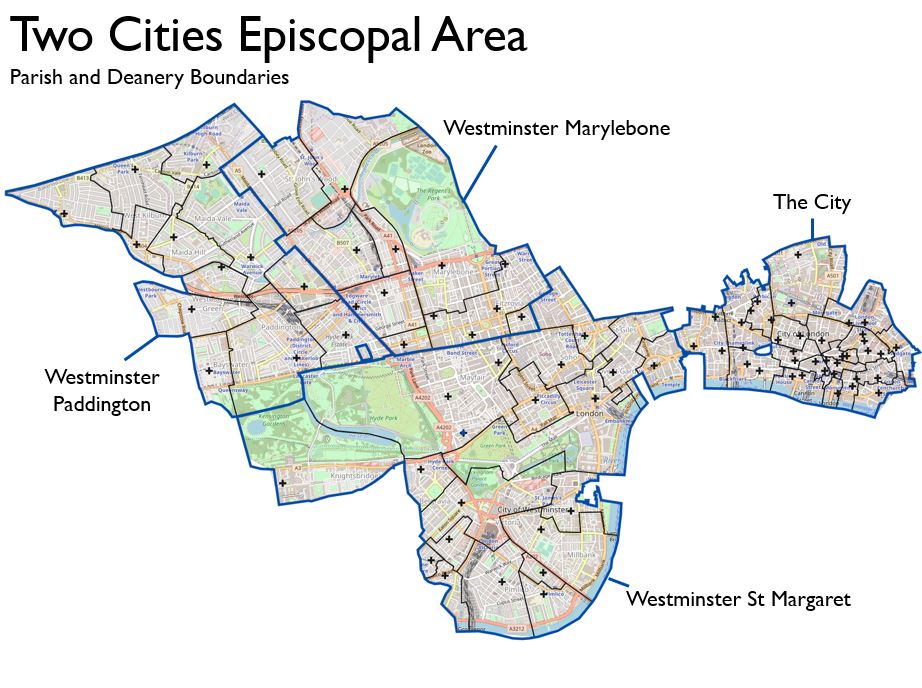 “A map of the parts of London I serve” (The Ven. Luke Miller)

London takes its diversity seriously, and our emergency response and resilience structures are formed around a partnership of organisations which include the Faith & Belief Sector Panel. As Panel Chair, I don’t direct anyone’s actions in an emergency, but I help coordinate them with the Blue Light services and other sectors (such as the military, business and voluntary sectors). So when at about 0530 on a day in 2017 my phone buzzed with a text to say that one of our churches was helping support the fire brigade because there had been a big fire in a tower block overnight, I rang the local church. It was the beginning of an incident whose baleful results are still with us. The Grenfell Tower fire was the largest single loss of life in the UK since 1945. As the Public Enquiry unfolds, the amazing work of the church and the mosque has been highlighted.

Part of the point is that we, as people of faith, are part of the community, and still there when, as the Head of the London Ambulance Service once put it to me, “We have all gone home for tea and medals.”

When COVID-19 began we had learnt from Grenfell, and from three other incidents in that difficult year of 2017, and consequently had a better structure in place. We evolve all the time, learning and trying to get better. My multi-faith connections are now much more developed, and we have learned how to reach more widely and effectively. We now have coordinated support from the Greater London Authority, which is the Regional Government. I am a full member of the Strategic Coordination Group which is managing London’s COVID-19 response and co-chair a sub-group coordinating Faith & Belief with communities, the voluntary sector and funders. 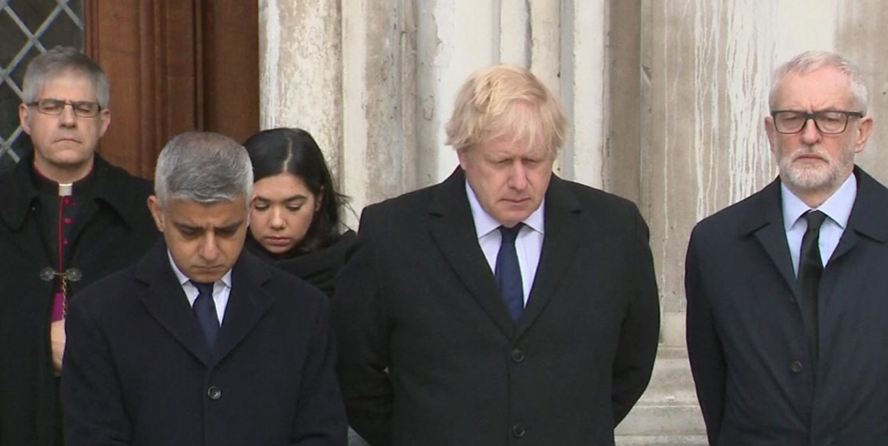 “A vigil in the City of London following the attack at Fishmongers’ Hall in November 2019. I am far left. In front (L-R), the Mayor of London Sadiq Khan, the Prime Minister Boris Johnson and the Leader of the Opposition Jeremy Corbyn” (The Ven. Luke Miller)

As the Covidzeit (German people are great at coming up with pithy words) has gone on, we in the Faith & Belief Sector have changed the narrative not only in London but nationally. In the face of so many deaths, we contributed Funeral Standards, and there have been no mass burials nor ‘direct cremations’. As the COVID-19 situation evolves so does our work: we in the  are now helping to bring trusted voices to speak to communities to combat vaccination hesitancy. 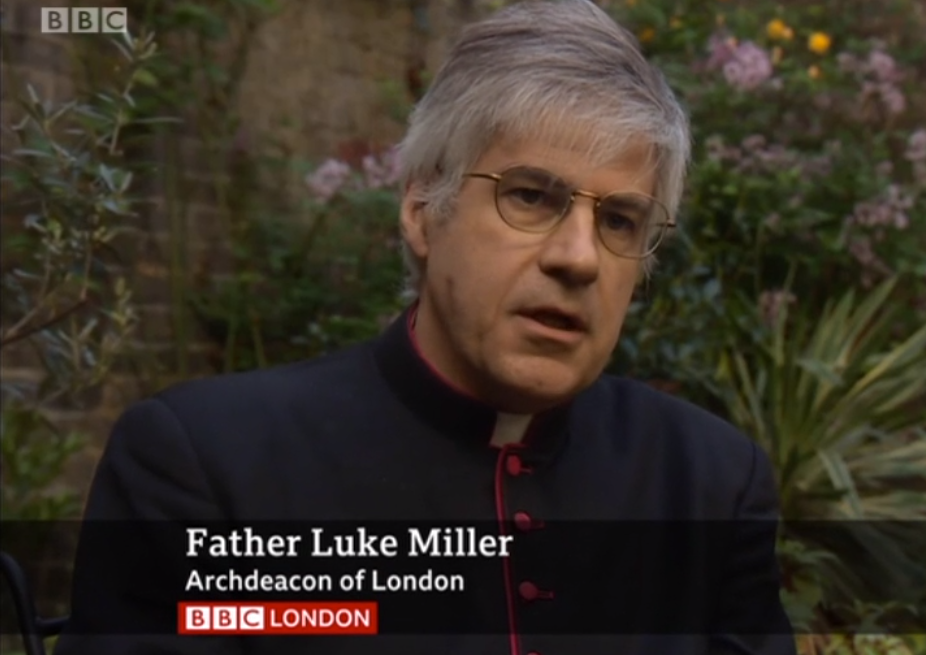 The Ven. Luke Miller was interviewed in the spring of 2020 for BBC London News about the launch of the COVID-19 related Funeral Standards

We made and won the argument that Churches are not places of recreation to be treated like pubs; that worship is not a discretionary activity like going to the football. By now we have become used to the fact that we have separate government guidance for places of worship and forget how amazing that is. While the Government closed places of worship in our first national lockdown, we have been allowed to keep our church buildings open throughout the second and third, where local risk assessment allows it. We might not be able to sing, but sacraments may be celebrated, and alongside all the live streaming, the corporate prayer of the church catholic is celebrated in the physical gathering of the Body of Christ. The natural benefit to wellbeing and the supernatural benefit to the welfare of souls are incalculable.

The public authorities began by wanting to use us as messengers to communicate where they cannot reach. But COVID-19 has suddenly revealed to civil society the scale and importance of our service, from food banks to night shelters to schools to good old-fashioned parish visiting. They have seen how much is happening and how dangerous it is when it stops, and they know that we do things they cannot do. Just as the local church was getting on with it during the Grenfell Tower crisis in the middle of the night before anyone asked them, still less ‘deployed’ them, so our importance relies on local people doing local things, simply, courageously and indefatigably following the command to love our neighbours. 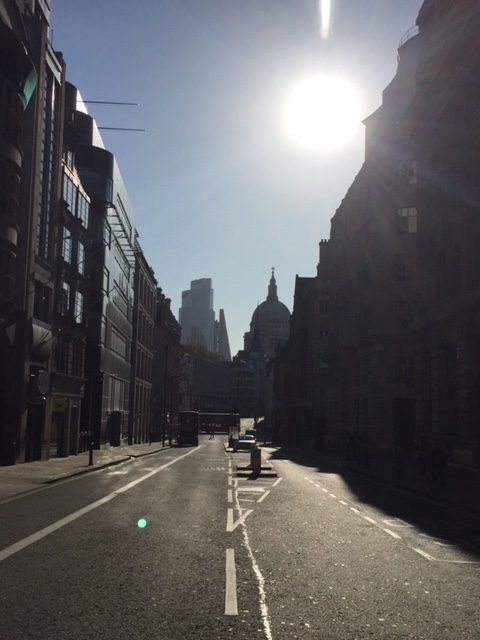 “A photo of Ludgate Hill, empty during lockdown” (The Ven. Luke Miller)

This certainly has had an effect. About 20 years ago, one of our politicians famously said, “We don’t do God.” It looked as though faith in general, let alone Christianity in particular, was being elided from the public square. After Grenfell, and the terrorist attacks we suffered in 2017 which saw similar responses, and now throughout COVID-19, civil society is indubitably ‘doing God’ again, and that is important for us all. Emergency response is not the only reason, but it is an important reason. We are not credible because of the words of local Archbishops and Bishops – indeed they have faced stringent criticism for what they have said or not said in the last year. We are credible because of our faithfulness to the Gospel, which has been shown by people in their local communities who have stepped up to help in moments of crisis.

“The national service in Westminster Abbey 14 days after the terrorist attack on Westminster Bridge in 2017” (The Ven. Luke Miller, back row of clergy)

At the end of 2020, I was appointed by the Mayor of London as a member of the London Recovery Board, which will extend this business of working with Faith & Belief from the immediate response into the post-COVID life of London. COVID-19 has revealed again much that we like to hide from ourselves: inequalities, fears and inadequacies in so many aspects of our society. It has also revealed again the hope we proclaim. Civil society saw what we meant and recognised that we have something to offer without which it is itself impoverished and diminished. Out of the darkness of COVID-19 has come, as so often in the ways of God, a new light of hope.

Editor’s note: Thank you to The Rev’d Canon Dr Marian Free for connecting anglican focus with her cousin, The Ven. Luke Miller, so he could share this reflection with our community.