“Why!” wrote a perplexed Patrick Leslie in his diary in 1848 regarding the choice to base a new settlement at Drayton. “It has only the Public House, (first called The Fiver, then the Bull’s head), two shanties and just one well!”

This is a direct quote with Leslie’s exclamation marks used.

By 1840, land for “free settlers” [sic] was made available on the Darling Downs and Drayton was the first village. This lack of water meant that, some years later, the new settlement moved a few kilometers north and east to what we now know as Toowoomba. 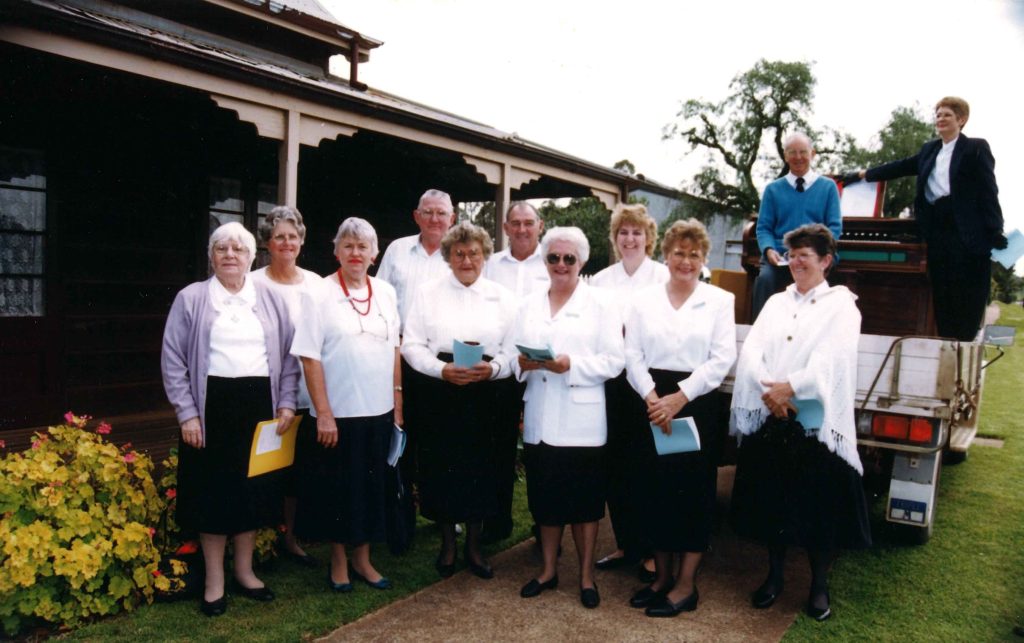 ACSQ community members gathered outside the Royal Bulls Head Inn on 20 September 1998 as part of the Benjamin Glennie Sesquicentenary celebrations. The original inn was where the first service was held in Drayton in 1848. The inn in the photograph was built on the same site. Choir members include Beattie Seabrook, Dawn Naumann, June Trevelthan, Tom Tolputt, Dulcie Scotney, Peter Gardner, Lillian Lockel, Tina Woodall, Wendy Tolputt and Enid Larsen (Image courtesy of the ACSQ Records and Archives Centre)

In that same year, The Rev’d Benjamin Glennie, who had only been in Australia for seven months, came up from Moreton Bay. He held the first public church service on the Downs at the public house in Drayton, which according to Kathleen Simmons was “certainly the smallest and possibly the least civilised that he had visited” (Simmons, 2000 A history of the Anglican Parish of Drayton). Drayton was then part of the Diocese of Newcastle, which stretched from the Hawkesbury all the way to Cape York and had a population of just 40,000.

Glennie travelled first, however, to the little town of Cambooya, the name of the residence of the Commissioner for Crown Lands, Christopher Rolleston. Glennie lived in Cambooya for the first six months of his 40 or so years in Drayton and the Downs. The little township of Cambooya, about 20 kilometres out on the Downs from Drayton, has always been an integral part of The Parish of Drayton. 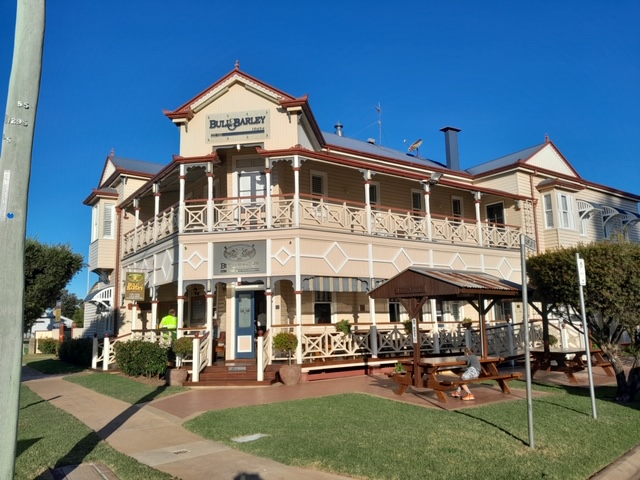 The Bull and Barley Inn, Cambooya

In 1904 the first All Saints’ Anglican Church was built in Cambooya. It was paid for by 1905, but was destroyed in a tornado in 1914. Work started on the new All Saints’ soon afterwards and is the one we still use every Sunday at 10am. It is a beautiful example of an early 20th century Queensland timber church, and is the largest in the parish. It is quite a bit bigger than the beautiful stone church of St Matthew’s, Drayton.

It was built by Patrick Doyle for 798 pounds and paid for by local parishioners with donations of between “sixpence and 100 pounds” (Simmons). The new All Saints’ was dedicated by the Archbishop, The Most Rev’d St Clair Donaldson, on November 7, 1915. Commenting on its destruction and rebuilding, he said “the result is the parish is ten thousand times better off than it would have been had the old building not been blown away” (Toowoomba Chronicle November 1915). 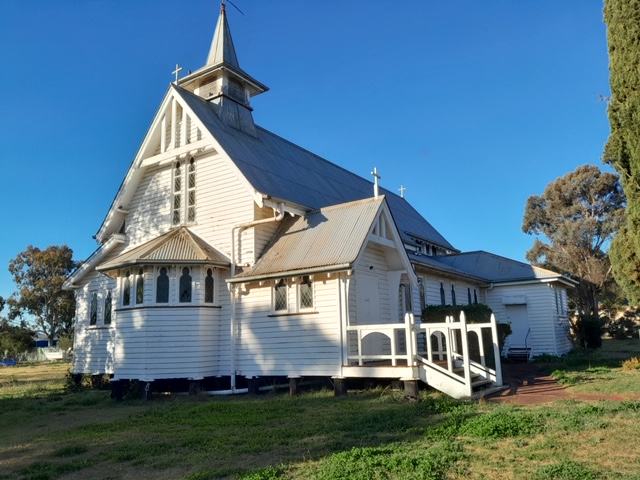 The only material change to the building since has been the relocation of the pulpit. The old one was found to be a “rather imposing structure that acts to hide the Lord from the congregation on the north side of the church.” By “Hiding the Lord,” they meant some of the congregation couldn’t see the priest’s actions at the altar during the Great Thanksgiving.

When the parish had five church centres, Cambooya was its geographical heart. Because of this, many parish and town celebrations were held there. Even now, the three denominations in Cambooya have this same sense of unity. Four times a year, on the fifth Sunday, we still all meet together to worship, moving between the Anglican, Uniting, and Roman Catholic Churches. We jointly present the Cambooya Community Carol Service every Christmas.

We are establishing a wonderful connection with the local state school community and recently paid for a student to attend their Year Six camp, protecting them from the “shame” of being the only family who could not afford to attend. Regional folk are proud folk, and we take care of each other.

But some things do not change. The Rev’d Joseph Taylor, at his first Parish Council meeting in 1941, remarked on two things: the beauty of the parish’s churches and the parlous nature of the parish finances! Drayton is an aging, yet enthusiastic and growing parish, but the beauty of our two main parish churches, St Matthew’s in Drayton and All Saints’ in Cambooya, requires a startling amount of money to maintain. 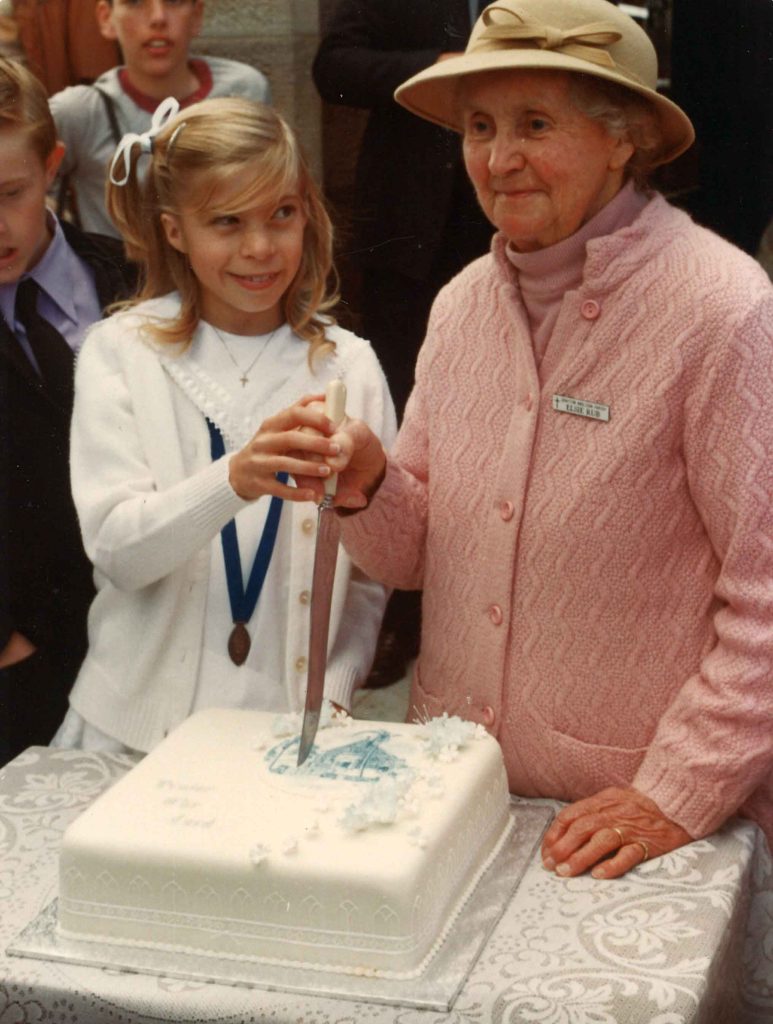 Centenary celebrations at St Matthew’s, Drayton, with Elsie Rub (oldest communicant at the service) and a server (youngest confirmation candidate at the service) cutting the cake on 16 August 1986 (Image courtesy of the ACSQ Records and Archives Centre)

Our vision for our communities on the Downs is to truly show the great love of God as we go out into these communities in the faithfulness and grace of Christ – just as it has been since Benjamin Glennie first came by horse to this “small and uncivilised” area of what was formerly part of the vast Newcastle Diocese.

The Bush Ministry Fund (The BMF) seeks to help rural parishes maintain clergy to varying degrees in the rural and remote parts of our Diocese. Please remember the BMF in your personal and corporate giving, either with our retro-cool little money boxes or digitally, and how important every one of these little communities are, and have been, to the ethos of our Diocese.