On Friday 15 March 2019, a 28-year-old Australian man shot dead 50 people in Christchurch, New Zealand. In addition, he wounded 48 others, with a number of these critically injured. And, as he shot women, children, and men…he filmed what he saw and gloated, posting it on social media. It seems inconceivable that people could be murdered as they gathered for prayer in the peaceful city of Christchurch…and, yet it has happened. Consequently, I think we find ourselves in new territory.

But, it is now uncomfortably clear that people can be radicalised through extremist right-wing ideology, including White Supremacist teaching. Teaching that states a particular group – in this case the Muslim community – are to blame for the major problems of society. Through caricature, hate-filled speech and deception, the humanity of those who are Muslim has been minimised, resulting in a white Australian male murdering 50 people in New Zealand. It has resulted in him trying to justify the evil because the men, women and children he murdered were Muslim! 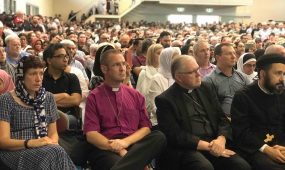 There may be many layers to this ‘new territory’ for us, and some of these come from the deep friendship that exists between Australia and New Zealand. Each year on Anzac Day, we are reminded of the origins of this. New Zealanders work in Australia, and we work in New Zealand. New Zealanders come to the Gold Coast for holidays, and Australians go skiing in Queenstown. Both countries share a friendly rivalry in rugby union, although the New Zealand national team are consistently better than our own.  Surely we – the people of Australia and the people of New Zealand – are family. So, this horrific violence has been perpetrated by one family member against another family member.

I think most would agree that it’s not possible to justify what has been done…and the potential for further violence is possible. Could it provoke retaliatory attacks against churches from those who believe that Christians are the problem? Or, could it provoke copy-cat attacks against mosques in other places?

I think this is new territory, at least for us in Australia. Maybe a line has been crossed, and there is new awareness of where unchallenged xenophobia can lead? Maybe a sleeping giant of compassion will now wake in the hearts and minds of all – breaking the self-imposed shackles of apathy, indifference and perceived powerlessness?

As Anglican Christians, we might ask ourselves what Jesus might have done in response to this? We might even have a sense of how God is calling us to respond as individuals, as congregations, and as a church? I do not think that we are called to hide under the covers hoping that things will get better by themselves, or throw our hands up in the air thinking that we are powerless to do anything worthwhile! Instead, maybe we are called to acknowledge the challenge and complexity, before praying, ‘Here I am – what do you want me to do?’

I think there are at least the three ways that we can constructively respond.