“And so it is not the painting that ‘speaks’. A painting does not mean (to say) anything. Were speaking in fact its aim, it would certainty be inferior to speech and would need to be ‘sublated’ by language to receive meaning, and a clearly communicable meaning at that. Between the figurative order of the painting and the discursive order of language there exists a gap that nothing can bridge.”

– Sarah Kofman, ‘The Melancholy of Art’

“What you’re looking at is a combination of my efforts to say something and what the painting is saying independent of me. It’s saying more than me now. So, I can just listen, you know?”

“What guides the graphic point, the quill, pencil, or scalpel, is the respectful observance of a commandment, the acknowledgement before knowledge, the gratitude of the receiving before seeing, the blessing before knowledge.”

– Jacques Derrida, Memoirs of the Blind 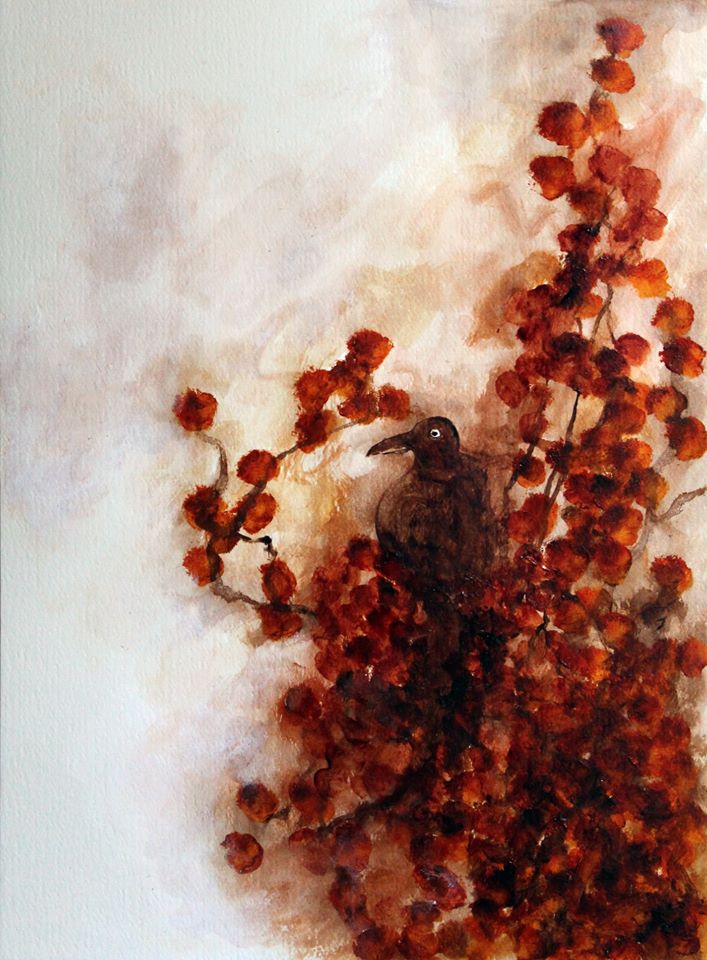 Kofman denies that a painting has anything to say, otherwise why not just speak instead of paint? There is a gap between painting and language that cannot be overcome, and it is within this gap that painting offers its ‘truth’. Ofili thinks painting does speak, but it speaks as the combination of an artist’s efforts to communicate and the ‘more’ that a painting communicates beyond the artist’s (and perhaps also the viewer’s) intention. Surely both are right, even if they cannot be neatly reconciled.

If Ofili’s ‘more’ overlaps with Kofman’s ‘gap’, perhaps what comes undone between them is any notion of a sovereign, all-seeing ‘I’, or ‘eye’. There is, for both Kofman and Ofili, something about painting that confronts us with the unsovereignty of sight, with the world’s excessive appearing that overflows our ability to translate seeing into saying, or seeing into knowing. If sight were sovereign, if it could fully comprehend the world’s appearing, painting would be redundant, a mere reproduction or representation of what is known and grasped ‘immediately’ by vision’s power to receive the world as intelligible, or within the bounds of ‘discursive order’.

But sight is not sovereign. The world’s coming to appearance is never fully comprehended. No one could ever say comprehensively what a sunset means, or what the face of a child means, or what the colour blue means. Each are events or bursts of sense that are never metabolised fully within language. Painting responds to and plays with this excess. It does not represent the world; it presents its excessive appearing, becomes its appearing, supplementing and carrying it further. Painting stages, within unending difference and variation, the wonder of existing in a world where what is visible is not a closed set of known forms but an infinitely open passage and variation of sense, never reducible to our systems of knowledge. Which is why what is visible must be shown or presented rather than accounted for or explained – every art form does this in its own way. Painting invites us to ‘listen’ to the fact that we see a world that goes far beyond any ‘discursive order’. It lets us acknowledge, as Derrida puts it, a receiving and a blessing that come before knowledge, before seeing. It opens the unsovereignty of sight.

When I paint, I never think of it as representing the content of my faith, even when I’m painting something religious. Perhaps this is because faith, for me, is not synonymous with belief, with having something to say about God. But painting is for me an act of faith, a way of staying faithful, perhaps to God, or to the open wonder of existence. Faithful to the gift and joy of the world, its carnation. Painting passes on the blessing.