If you wanted to get my back up back in 1982 there was an easy way to do it: talk positively about the Christian music scene of the day. Just a few words on that topic from anyone would have me ranting about what I saw as a ghetto-ised form of sheltered expression that only served to further distance Christians from their true task – living lives of faith in the public space by being Christian externally as well as internally. That meant being serious about international justice issues of the day, including threats of nuclear war, Super Power adventurism, apartheid and racism, and local issues like SEQEB strikes and homelessness.

Well I did know that I had to do something about it. So the idea of forming a band with others who felt the same way seemed the most natural way to move forward.

We did so at an interesting time in the pop culture zeitgeist. Around the world (but most obviously from the UK and surrounds) a number of bands seemed on the same wavelength. U2, a little band from Dublin, had just released their second record, October, a collection of songs honest about themes of faith, entwined with punk energy and sorrowful awareness of the struggles of their homeland. Simple Minds suggested that belief was a “beauty thing” on the single, ‘Promised You a Miracle’. The Alarm, The Waterboys and many others were producing music with spiritually searching and gritty intensity on major record labels, miles away from the insular Christian music of the day. This was not worship music. This was life music. 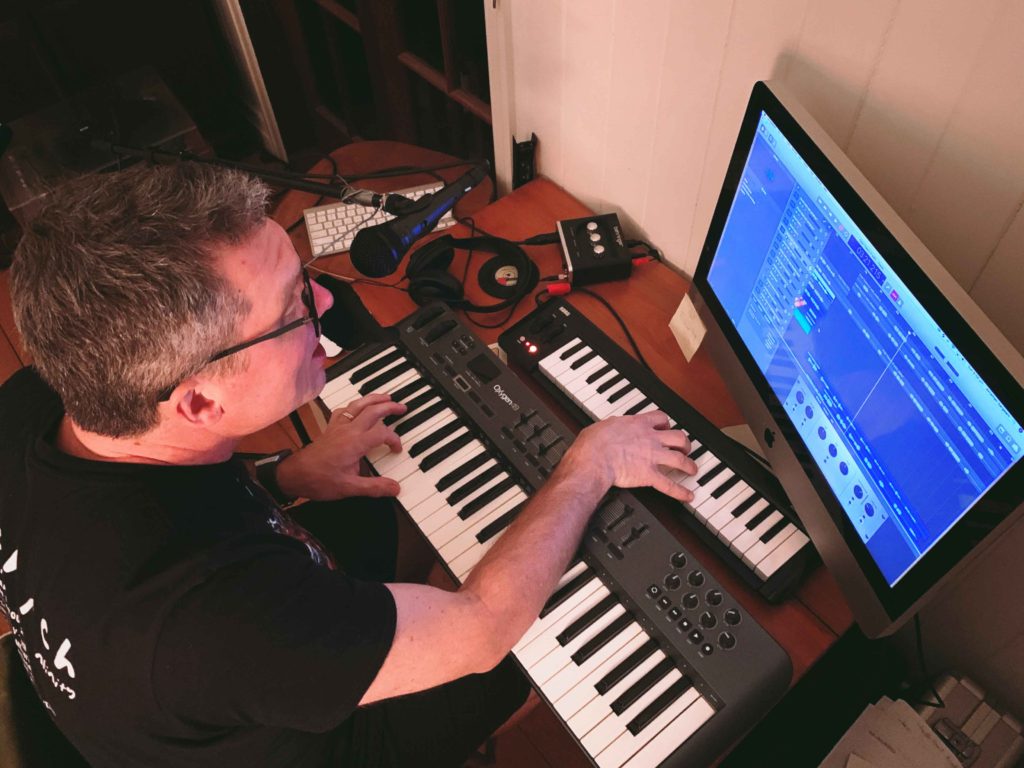 Jonathan Sargeant composes songs for The Dolby System in July 2020

Thus emerged our band, Modern Poets. Expressing our faith was not our sole motivation, though. We loved playing together and making some art, especially in a then pretty oppressive Queensland environment for such endeavours. The nature of being in a band creates a kind of tribal ‘us versus them’ mentality that drew us even closer together. The music spoke about our faith, sometimes directly, sometimes poetically, and sometimes through our concern about those justice issues. Mostly all three happened at the same time.

We played in pubs, beer barns, clubs and taverns up and down the east coast of the country. We won some Battles of the Bands. We supported some bigger bands we liked (Goanna of ‘Solid Rock’ fame) and some we, um, didn’t. We made some records and were reviewed in Rolling Stone (one 7” was “sub-Byrds jangle” though “cloyingly memorable”). We played in the city Botanical Gardens Sound Shell (before there was the River Stage!) to quite a crowd in 1985 (while recollections differ, 6000 is the smallest number we remember). We played the River Stage, too, and Festival Hall a couple of times. We had a number one on the Brisbane Independent album charts, though to be honest you didn’t need to sell much to do that. We nearly moved to Sydney to be signed by a larger label, but that’s another story… 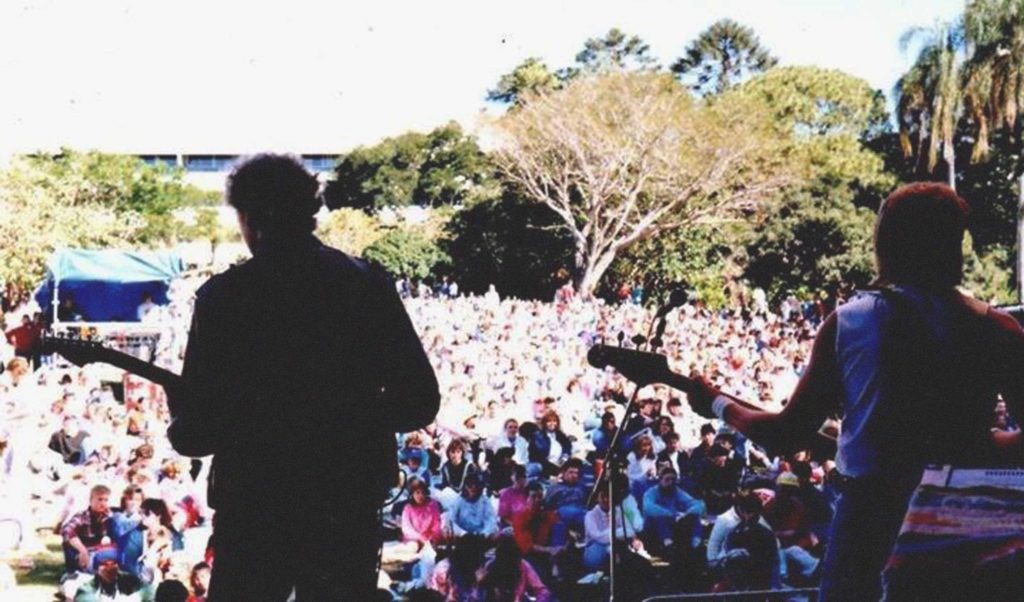 The Modern Poets perform at the Sound Shell in the Brisbane City Botanical Gardens, in 1985

And, along the way we tried to maintain our original focus, mostly through intense band meetings and camaraderie. We played at many fund- and awareness-raising gigs for Brisbane Youth Service (BYS) over the years, raising money for their work with rough sleepers in the city. We played at Anti-Apartheid rallies and shows for the Nuclear Disarmament Party. We also played for churches, acoustically at services, loud at events like YAF (Youth Australia Fellowship), Anglican Youth Rallies, Gatherings, and NCYCs (National Christian Youth Convention). When we played in churches, I would give a little homily about our belief in living Christian life in the public space, talking up BYS and other justice causes that were natural for Christians. We would use the words, “We’re not a Christian band, we’re a band of Christians.” Those words are pretty commonly heard on the lips of artists these days. 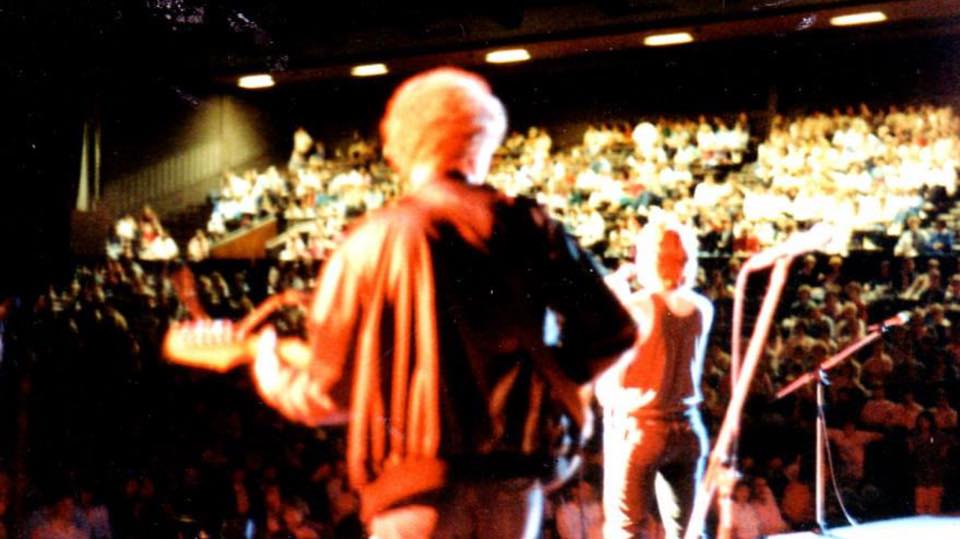 Like all bands, after a few years we’d exhausted ourselves. We moved on to other things, other bands, marriages and kids. But our focus on trying to live lives being authentic to our faith in the public space stayed. Doing that in ways that were a bit out on the edge led me to studying youth work and taking up a position as a chaplain in a state high school in the first wave back in 1991. These were experiences that have left me with a compass that always tries to think about faith from the perspective of people who are NOT part of the church. How is faith seen? How is the Church seen? These are questions often with sobering answers. My longstanding interest in how faith and the arts intersect led to a Master’s thesis, an unfeasibly large music collection and ongoing doctoral research.

These days the original Modern Poets band members have reunited, performing a reunion gig a few years back at the Griffith Film School sound stage. We’ve formed a new band (called The Dolby System until the lawyers come calling) and have a new album nearly in the can. We’re middle-aged now and sing about depression and artificial intelligence. But those years in the Modern Poets were enormously formative, to both our identities and faith. An unshakeable belief in the positive place of faith and the Church in the public space was born then. An even deeper belief in what can be achieved when faith and the arts unite us against injustice remains. 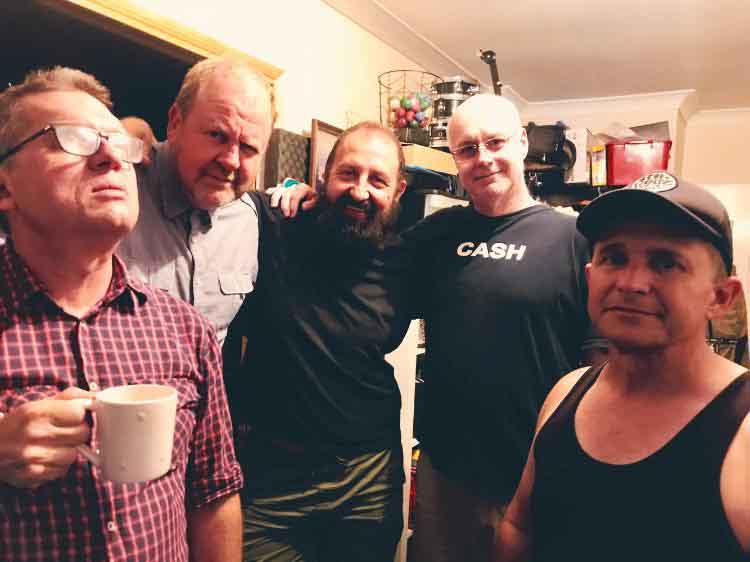